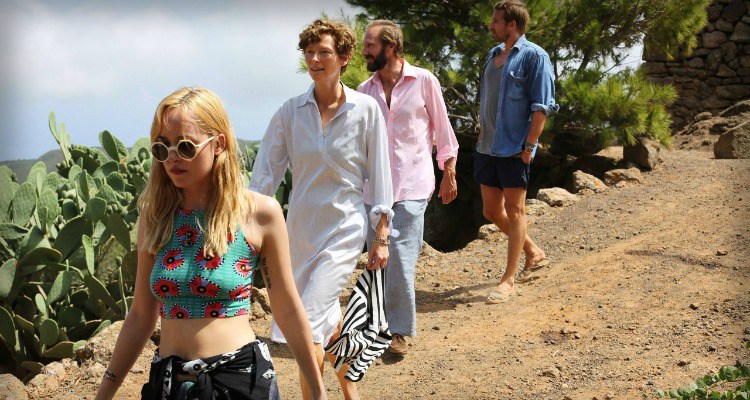 A BIGGER SPLASH (Italy | France/15A/124mins)
Directed by Luca Guadagnino. Starring Tilda Swinton, Ralph Fiennes, Dakota Johnson, Matthais Schoenaerts, Aurore Clément.
THE PLOT: Marianne (Tilda Swinton) and her partner Paul (Matthias Schoenaerts) are hiding away from the former’s rock and roll lifestyle, after surgery on her throat has put her singing career on hold. Their peace is shattered by the arrival of Harry (Ralph Fiennes), a former lover of Marianne’s, and his newfound adult daughter Penelope (Dakota Johnson). It is not long before history becomes the present as the four struggle to come to terms with their pasts and their futures.
THE VERDICT: ‘A Bigger Splash’ – named after a painting by David Hockney – is a remake of the 1969 French film ‘La Piscine’. The film also marks the first collaboration between Swinton and director Luca Guadagnino since ‘I Am Love’ in 2009.
Although she does not speak for much of the film, Tilda Swinton seems to reprise her role as David Bowie from his 2013 music video “The Stars (Are Out Tonight)” in the flashback scenes of the film. Or she was dressing up as Win Butler from Arcade Fire. Either way, Swinton full advantage of her character’s inability to speak, making Marianne’s desires and motivations instantly recognisable and understandable. As well as this, every time Swinton appears on screen she lights the film up with the grace and poise she brings to the character. On the other side of the coin is Ralph Fiennes as Harry. As motor mouthed as Swinton is silent, Fiennes seems to take pleasure in playing a self centred and emotionally stunted character, bringing joy and jealousy to a wonderful dance sequence soundtracked by The Rolling Stones’ “Emotional Rescue”.
Elsewhere, Matthias Schoenaerts shows a mostly gentle but troubled character in Paul; his chemistry and ease with Swinton being a joy to watch, and Dakota Johnson plays a more world savvy and manipulative version of her character from Fifty Shades of Grey.
David Kajganich’s screenplay rather faithfully follows the events of La Piscine, but the twist of Marianne being unable to speak – other than in intimate moments with Paul – adds a layer of secrecy to the already complicated history between these characters. Add a hint of incest and a suggestion of rape – or statutory rape – and things become complicated very fast. It is clear from almost the outset that we are not going to get answers to all the questions the film poses, but rather than this being an accepted part of the film, it leaves the film feeling unfinished and thin.
Director Luca Guadagnino tries to bring cinematic quirkiness and lightness to a film about love, obsession, rage and jealousy, and while this almost works for the first two acts of the film, in the final act this feels ever more self-conscious and forced as it consistently brings the audience out of the film. The performances are strong, but the pacing of the film struggles to get through the 124 minute running time, and the tone of the film changes so suddenly toward the end of the film as to be jarring.
In all, ‘A Bigger Splash’ is a film filled with wonderful actors and great performances. The cinematography is a distraction at times, but since the story is fairly thin and offers few answers, this is not always a bad thing. The cast deserved better though.
RATING: 3.5/5
Review by Brogen Hayes