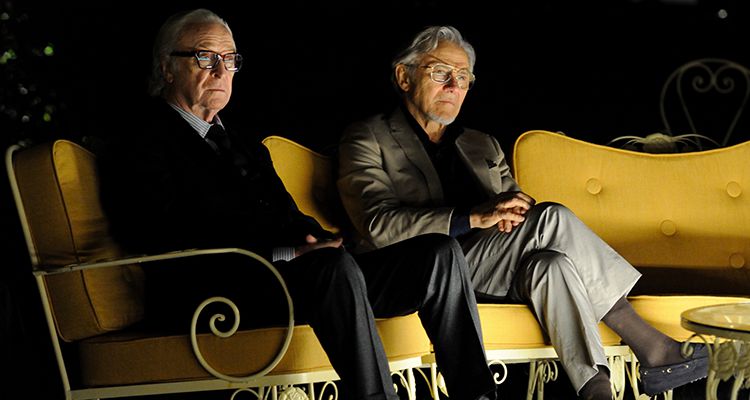 Last weekend, at a ceremony in the German capital of Berlin, Sir Michael Caine received the Honorary Award of the EFA President and Board for his contribution to cinema throughout his career. When accepting this award, Caine mentioned the fact that he was nominated for a second award on the night – European Actor, for his role in Paolo Sorrentino’s ‘Youth’ – but was not worried about whether he would win. Just over an hour later, Caine won his second award of the evening.

With this in mind, Movies.ie takes a look back over the life and times of Sir Michael Caine, and picked out just 10 things – out of potentially hundreds – you really ought to know about this legendary actor.

1. European Film Awards
After winning his honourary award and the gong for European Actor, Caine took to the stage one final time last weekend in Berlin, when ‘Youth’ took home the top prize of European Film 2015. With trademark Caine wit, the actor quipped “Thanks for the job, and next time I’ll ask for more money”.

2. The Caine Mutiny
Born Maurice Micklewhite, Caine changed his name on the advice of his agent when starting out as an actor. Forst working under the name Michael Scott, he was told there was already an actor of that name. Seeing a marquee for ‘The Caine Mutiny’ outside a cinema in Leicester Square, the young actor seized the name, and Michael Caine was born.

3. Full Circle
In 1986, Caine’s life came full circle. While he starred in Neil Jordan’s ‘Mona Lisa’, the production offices for the film were located in the disused St Olave’s hospital, the very hospital in which Caine was born.

4. Top of the Pops
Caine is so well regarded in his home country of England that the ska group Madnesss had a top 10 hit with their song ‘Michael Caine’, in the mid-1980s. The song had Caine’s “My Name Is Michael Caine” quote sampled into the song. As well as this Swedish rock band Kent refer to Caine in their song ‘Palace and Main’, and The Divine Comedy mention one of his famous characters in their song ‘Alfie’.

5. Not a lot of people know that
Many people doing Michael Caine impersonations will use the line “Not a lot of people know that”, although Caine actually never said the line. This mistake seems to come from Peter Sellers when he appeared ‘Parkinson’ in 1972 and said: “Not many people know that. This is my Michael Caine impression. You see, Mike’s always quoting from the Guinness Book of Records. At the drop of a hat he’ll trot one out. ‘Did you know that it takes a man in a tweed suit five and a half seconds to fall from the top of Big Ben to the ground?’ Now there’s not many people who know that!”

6. Fame at last
Caine once said that he knew he’d made it as an actor when he started getting scripts to read that no longer had coffee stains on them, meaning that he was the first choice for that role.

7. Garlic aversion
Caine served in the Korean War during his two years in the British Army as part of his National Service. Ever since, he said he hated the smell of garlic since it reminded of his time in the war as Korean and Chinese soldiers would eat is as a snack. Caine eventually overcame this when he became a restaurateur.

8. Tragic Life
Some time after his mother died, Caine and his younger brother, Stanley, learned they had an elder half-brother, named David. David, who shared the same mother as Caine, suffered from severe epilepsy and had been kept in Cane Hill Mental Hospital his entire life. Although their mother regularly visited her first son in the hospital, even her husband did not know the child existed. David died in 1992.

9. Side Job
Caine is a fan of chill-out music and released a compilation CD called ‘Cained’ in 2007 on the UMTV record label. According to the man himself, Caine had been creating chillout mix tapes as an amateur for years.

10. When can I see Michael Caine on the big screen again?
Michael Caine’s next film is Paolo Sorrentino’s ‘Youth’, for which he won the European Film Award for European Actor on Saturday night. ‘Youth’ is released in Irish cinemas on January 28th 2016.