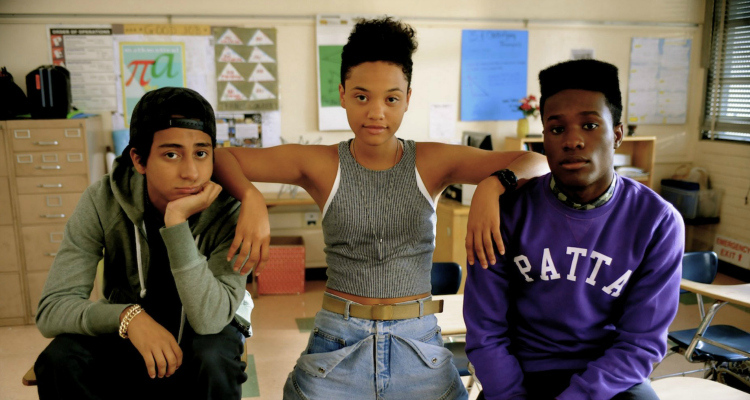 10 things you need to know about DOPE

This week, DOPE is released in Irish cinemas. Executive Produced by Pharrell Williams, the film follows Malcolm (Shameik Moore) and his friends Diggy (Kiersey Clemons) and Jib (Tony Revolori), who are the uncool high school seniors. Obsessed with 90s hip hop, the kids are consistently bullied by their peers until they get invited to a party thrown by dope dealer Dom (Rakim Mayers). When the party is raided by a rival gang, and Malcolm discovers he has a backpack full of drugs and guns, the kids find themselves drawn into a world they knew existed, but had never truly encountered before.
To celebrate the release of DOPE in Irish cinemas, Movies.ie has gathered together some facts about the movie… Keep reading to find out more.

1. Producer
As well as serving as Executive Producer on DOPE, Pharrell Williams produced most of the music in the film.

2. Bitcoin
Since DOPE focuses on a group of kids who are geeks obsessed with 90s hip-hop and modern technology, the film was the first to accept Bitcoin for ticket purchases in the USA via MovieTickets.com

3. Festivals
As well as debuting at the Sundance Film Festival in January this year, DOPE was selected to close the Director’s Fortnight section at the Cannes Film Festival in May, where it received a standing ovation.

4. Soundtrack
Unsurprisingly, since DOPE celebrates 90s hip-hop, the film is filled with great songs from artists such as Public Enemy, A Tribe Called Quest and Digital Underground.

6. Debut
Rapper A$AP Rocky makes his acting debut in DOPE; he auditioned for the film after helping his girlfriend at the time, Chanel Iman, rehearse her lines. The film is also Iman’s acting debut.

7. Incredible Crew
Shameik Moore, who plays the lead role of Malcolm in DOPE, previously appeared on Cartoon Network’s debut live-action sketch-comedy series, INCREDIBLE CREW. Moore is also a rapper, and will appear in Netflix’s THE GET DOWN in 2016.

8. Reviews
The film has been well received both at festivals and in cinemas. It holds a 88% approval rating on Rotten Tomatoes, and was given a 5/5 rating by Brian Moylan from The Guardian.

10. When can I see DOPE?
DOPE is released in Irish cinemas on September 4th 2015. Watch the trailer below…