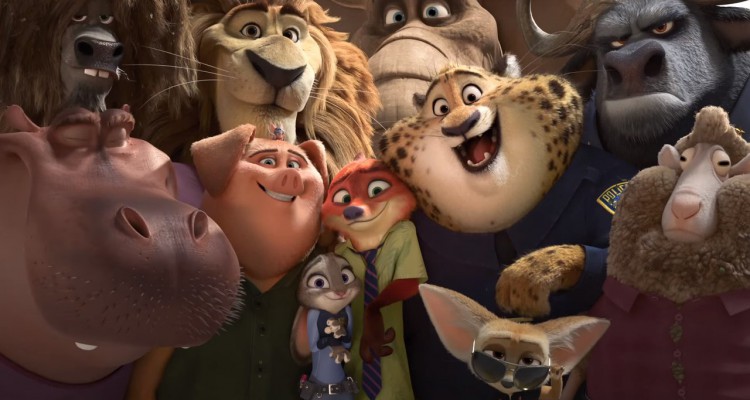 ZOOTROPOLIS (USA/PG/108mins)
Directed by Byron Howard, Rich Moore and Jared Bush. Starring Ginnifer Goodwin, Jason Bateman, Idris Elba, Jenny Slate, J.K. Simmons, Alan Tudyk.
THE PLOT: In an animal world where predators and prey have evolved enough to live together in peace and harmony, the big city of Zootroplis beckons to newly minted bunny cop Judy Hopps (Ginnifer Goodwin). After she is assigned to parking duty, and becomes acquainted with the cunning fox Nick Wilde (Jason Bateman), mammals start to go missing, and it is up to Judy and Nick to put their differences aside and work together to solve the case.
THE VERDICT: The world of ‘Zootropolis’ is a fun one, and the storytellers and animators of the film obviously had a blast pulling together the different districts of Zootropolis, built so that different animals could live in places close to their native habitats, such as Tundra Town, Sahara Square and the Rainforest District. At its heart, ‘Zootropolis’ is an odd-couple buddy movie, pairing a rabbit and a fox together, but it also has messages about prejudice and making assumptions about others based on how they look.
The voice cast is led by Ginnifer Goodwin – known for playing the good hearted Mary Margaret in ‘Once Upon a Time’ – and she is on her usual chirpy, tenacious form here, making Judy Hopps an endearing character. Jason Bateman seems the perfect choice for a cunning and laid back fox, with his voice suiting the character incredibly well. The rest of the cast features Idris Elba, Jenny Slate, Don Lake, J.K. Simmons, Octavia Spencer, Alan Tudyk and Shakira.
The screenplay, written by Jared Bush and Phil Johnston plays with the old fashioned Disney idea of anthropomorphic animals, walking and talking in a human style city. This is the idea that made Disney the powerhouse that it is today, and it is great to see the studio turn their wit upon themselves, both sending themselves up while telling a fun story. As mentioned, the story is an odd-couple cop movie, which plays with the preconceived notions about animals – bunnies are stupid, foxes are sly and sheep are meek – turning them on their head for comedic effect. There are times when the screenplay struggles to keep the energy of the first act of the film going, but in general, the film is well written with smart dialogue and plenty of laughs.
Directors Byron Howard, Rich Moore and Jared Bush have created a wonderful world in ‘Zootropolis’, with the action and laughs balanced almost perfectly. The action sequences are well paced, and we are given enough about these characters too root for them, while having fun with the idea that not everyone can be judged by the way they look or where they are from. There is a slump in the pacing just before the third act, and while the animation is beautiful and the districts of the film are used well, there is the feeling that this becomes more of the joke than the screenplay itself. That said, ‘Zootropolis’ is fun and funny, but just not quite as smooth as it could have been.
In all, ‘Zootropolis’ is a fun and action packed film that plays with preconceptions and stereotypes in the animal kingdom, while sending up the idea of anthropomorphised animals; the one that made the studio its name. The voice cast do well and the film looks great, there are just some slumps in pacing and story toward the end, which the film never quite recovers from.
RATING: 3.5/5
Review by Brogen Hayes