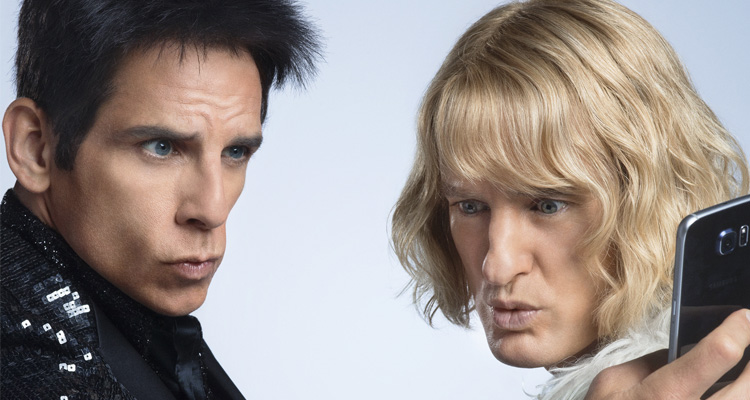 ZOOLANDER 2 (USA/12A/102mins)
Directed by Ben Stiller. Starring Ben Stiller, Owen Wilson, Penelope Cruz, Will Ferrell, Kristen Wiig, Justin Theroux, Benedict Cumberbatch.
THE PLOT: After the collapse of his poorly-constructed Institute For Kids Who Can’t Read Good And Wanna Learn To Do Other Stuff Good Too – killing his wife and landing on the face of his fellow model superstar, Hansel (Wilson), Derek Zoolander (Stiller) soon loses custody of his son too, and so heads off to live like ‘a hermit crab’ in the wilderness. The mysterious gunning down of five major pop stars (we delightfully get to see Bieber once again bite the bullet in the opening scene) leads interpol agent Valentina to believe Zoolander holds the key to unravelling their dying social media poses. Hansel too is being drawn out of retirement, happy to escape back into the real world when his beloved orgy gang – including men, women and goats of all shapes and sizes, including Kiefer Sutherland – are all simultaneously pregnant.
It soon becomes apparent that Derek’s orphaned son is the key to it all, which turns into a race against time when the evil Mugatu (Ferrell) makes his escape from prison.
THE VERDICT: Right down with ‘Dumb & Dumber To’ and ‘Anchorman 2: The Legend Continues’, ‘Zoolander 2’ is one hot mess.
Which is both disappointing and surprising, given that Stiller knows funny, and this was his golden ticket out a major box-office slump. ‘Zoolander 2’ will open strong, but weak word of mouth means that this lame sequel will be so last season.
There’s about five-minutes’ worth of good gags to be saved from the fire here, most of them in the momentarily funny ‘Eyes Wide Shut’ closing battle. For the other 137mins though, you may find it a struggle to keep your eyes even half open.
A has-been playing a has-been worked wonders for Mickey Rourke in ‘The Wrestler’, but Stiller is on the ropes here, with pop culture gags that would make even a Wayans wince. Is mentioning Netflix and Uber really all that funny? Or, eh, hip? Riddled with lame gags, crap CGI (Fred Armisen as an 11-year-old boy – why?), irritating supporting oddballs that are far more Jar Jar than haha, and the new Pauly Shore to boot, ‘Zoolander 2’ plays like a rushed SNL sketch that simply won’t stop.
The first ‘Zoolander’ had Bowie. This one has Sting. A lot. Enough said.
RATING: 2/5
Review by Paul Byrne