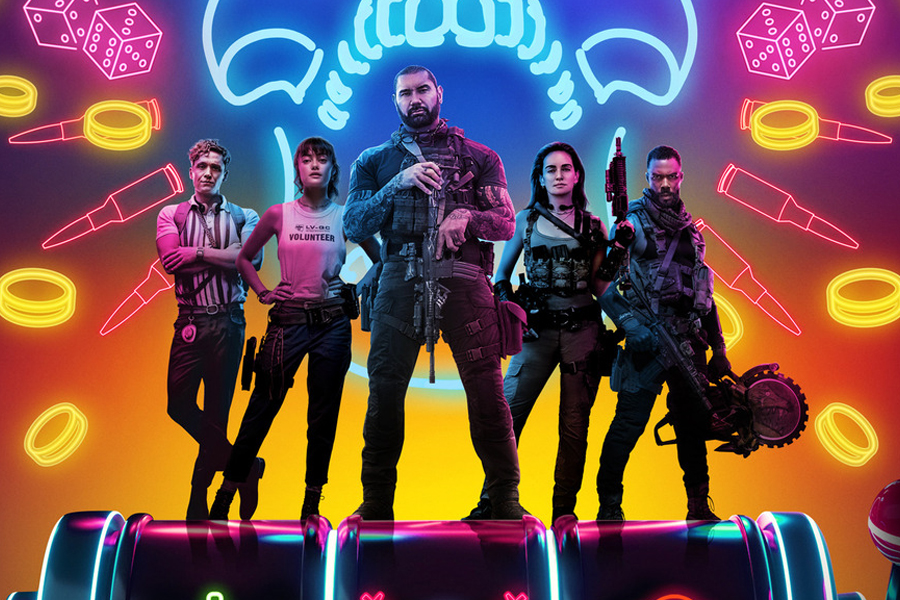 Director Zack Snyder is no stranger to big, bold, visually stunning blockbusters, the man behind ‘300’, ‘Dawn Of The Dead’, ‘Watchmen’ and ‘Justice League’ returns next month with another eye-catching feast launching exclusively on Netflix, ARMY OF THE DEAD.

The movie takes place following a zombie outbreak that has left Las Vegas in ruins and walled off from the rest of the world. When Scott Ward (Dave Bautista), a displaced Vegas local, former zombie war hero who’s now flipping burgers on the outskirts of the town he now calls home, is approached by casino boss Bly Tanaka (Hiroyuki Sanada), it’s with the ultimate proposition: Break into the zombie-infested quarantine zone to retrieve $200 million sitting in a vault beneath the strip before the city is nuked by the government in 32 hours. Driven by the hope that the payoff could help pave the way to a reconciliation with his estranged daughter Kate (Ella Purnell), Ward takes on the challenge, assembling a ragtag team of experts for the heist. They include Maria Cruz (Ana de la Reguera), an ace mechanic and Ward’s old friend; Vanderohe (Omari Hardwick), a zombie killing machine; Marianne Peters (Tig Notaro), a cynical helicopter pilot; Mikey Guzman (Raúl Castillo), a go-for-broke influencer and Chambers (Samantha Win), his ride-or-die; Martin (Garret Dillahunt), the casino’s head of security; a badass warrior known as the Coyote (Nora Arnezeder) who recruits Burt Cummings (Theo Rossi), a slimy security guard; and a brilliant German safe cracker named Dieter (Matthias Schweighöfer). Scott finds an unexpected emotional hurdle when Kate joins the expedition to search for Geeta (Huma Qureshi), a mother who’s gone missing inside the city. With a ticking clock, a notoriously impenetrable vault, and a smarter, faster horde of Alpha zombies closing in, only one thing’s for certain in the greatest heist ever attempted: survivors take all.

WATCH THE ARMY OF THE DEAD TRAILER BELOW

We were lucky enough to attend an online discussion with Zack to chat about the trailer. The Netflix event opened with a bombastic epic score to it. This isn’t something you immediately think when coming to watch a trailer for a zombie film but it fits what Zack Snyder is going for with his latest film, this is a film that combines two genres, zombie/heist.

People were flooding in from Twitter with questions for Snyder. Unsurprisingly about ‘Dawn of the Dead’ which saw Snyder’s theatrical debut. Snyder then introduced the trailer with man mountain Dave Bautista joining him. Their banter was quite familial which is no surprise as Snyder seems to grow quite close to many of those he works with.

Dave discussed why he was interested in joining the film. This was partly because he wants to further his growth as an actor but also in part because he’s wanted to work with Snyder since 300 which he states was a gamechanger when it released. Snyder himself was looking forward to working with Bautista because he knew Bautista was up for bringing out all the facets of this particular role, the humour, the drama and of course the action.

There is a clear respect here from Bautista as he remarks on Snyder’s grunt-like attitude. Getting the work done and getting his hands dirty. He works hard and this added to the “family atmosphere” that Bautista enjoyed on set with the entire cast. So when the entire cast chime in with their mutual love of this project I was excited to see what kind of adventure brought them all together.

And the trailer does not disappoint. It was bombastic, had that signature cinematic flair Snyder brings to each of his projects and introduced a new type of cinematic zombie I’ve affectionately dubbed the “Organised Zombie”.

During the Q+A Snyder spoke about the various revisions this film went through, there was even a version that didn’t see him directing. He joked about the various types of animal zombies and how in this world birds can’t become zombies because otherwise we would be screwed. Snyder also talked about the growth of his “Dead Universe” with the various prequels leading up to this film that will help flesh out the world for anyone looking for more content to chew on.

When asked about where the film was shot Snyder explained the film was shot in Mexico and Atlantic City in an abandoned casino. Various types of canons were used to fire out money during the heist sections but also the hundreds of gallons of blood. Snyder went into great detail about the various types of blood as well, from humans to shamble zombies to the alpha zombies that have evolved from what they once were. The moderator Grae Drake also brought up would there be any different cuts to which Snyder replied with a decisive no.

“Netflix has been amazing. Great collaborators. It was fun working with them as well as the cast and crew. This is the movie. I didn’t have to fight them. You don’t have to see a bastardised version.”
Fans also asked were there any other interesting locations he’d love to shoot in and with a wry smile Snyder wouldn’t comment.
“I can’t say because who knows, we may go there.”

Other questions were about the tone of the film and whether or not it’s funny and Snyder had a typically Snyder response to it.“Sure, but it’s also a rollercoaster, there is stuff I found funny but other people might not find funny.”

And finally as the Q+A wrapped up Grae Drake asked my question to Snyder and I was quite chuffed with his answer:
Dawn of the Dead was praised as a breath of fresh air for the horror genre, so what do you hope to achieve with Army of the Dead?
“I really wanted to make a movie that was a universe or an IP that I created. That would allow the audience to be on this ride that is purely my design. I am obsessed with tone and I just really enjoy this tone where you’re having fun but you’re not making fun and you’ve got the audience on the edge of cinematic reality where they are deep in this world that you’ve created, where you start bringing the walls and the rules in. I find that really fun.”

Army of the Dead with its bonkers premise and even more ridiculous set pieces could be the sugar infused zombie/heist adventure we didn’t know we needed this Summer.

ARMY OF THE DEAD Arrives On Netflix on May 21st