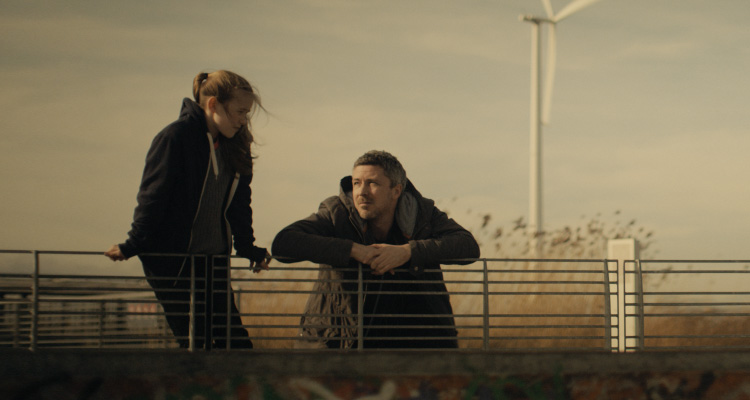 YOU’RE UGLY TOO (Ireland/15A/78mins)
Directed by Mark Noonan. Starring Aiden Gillen, Lauren Kinsella, Jesse Morris, Erilka Sainte, George Pistereanu.
THE PLOT: After her mother dies, Stacey (Lauren Kinsella) is sent to live with her uncle Will (Aidan Gillen). Stacey is full of anger at her life, and Will has been released from prison on compassionate leave to care for her, so the two must find a way to make this new relationship work.
THE VERDICT: YOU’RE UGLY TOO is a low-key Irish drama about the sacrifices we make for the ones we love, and finding a way to make a strange new situation work. Aidan Gillen is on strong form as former convict Will. It is clear that the character is trying his best to make the situation work, but his old habits are hard to break, and come back with a vengeance. Gillen makes Will sensitive and caring, but with a darker side that only shows now and again. Lauren Kinsella plays Stacey as a typical Dublin ruffian who, at 11 years old, would buy and sell you if you gave her half a chance. The relationship between Will and Stacey is a joy, however, as he is constantly trying to impress her, and she is too cool to be on what she considers to be an old man’s level. The rest of the cast is made up of Erika Sainte and George Pistereanu.
Mark Noonan’s screenplay focuses on a new family unit trying to do good in the face of troubles, health issues and an inability to change. The dialogue is clever enough, and exposition comes when it is needed, but not in waves of clunky dialogue. In reality, not a whole lot happens in You’re Ugly Too, but it is a careful examination of family and finding a way to make a painful situation work.
As director, Noonan allows the action to unfold in front of the camera, without ever making the situations feel forced or staged. As well as this, the performances are strong, and the relationships between the characters feel real and natural. There are some narrative structures thrown in to make the film feel worthwhile, but they work for the most part, and the film is fairly well paced; enough to keep the audience engaged.
In all, YOU’RE UGLY TOO contains strong performances from Gillen and Kinsella, is carefully written and well directed. An engaging look at modern families in Ireland and a powerful debut from Mark Noonan.
RATING: 4/5
Review by Brogen Hayes