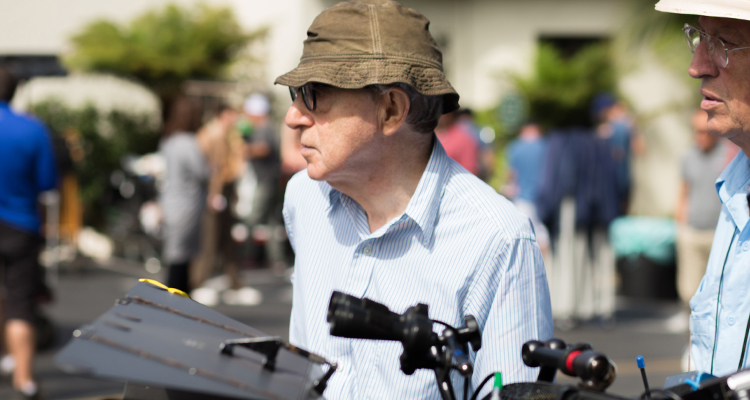 This month, Woody Allen’s latest film ‘Café Society’ hits Irish cinemas. The film debuted at Cannes – out of competition, as is par for the course with Allen – and stars Kristen Stewart, Steve Carell and Jesse Eisenberg as three members of New York’s famed café society of the 1930s, who find themselves caught up in a love triangle.

Movies.ie met up with Woody Allen earlier this year to find out more about his 47th film, whether he considers himself a rebel against Hollywood, and shooting on digital for the first time.

This is a very romantic film and maybe less cynical than previous ones…
Everybody thinks I’m cynical. I don’t think I’m cynical, I always think I’m realistic; if you go all over the world you find that people have difficulty with relationships; it’s one of the staples of literature starting from ‘Medea’ through ‘Anna Karenina’, that’s what happens with people, they have a terribly hard time. That’s why you have dating services on your telephone; people can’t get together and can’t make things work; they are always pining away for the other person, and marriages dissolve… So I feel I am reflecting the real world. Also, if I made a picture and everything was smooth, you’d really be bored!

Do you feel you pine for the old, glamorous world of Hollywood in the 1930s?
I don’t pine for it, as a director I would not have liked to work in Hollywood in the ‘30s because the studios ruled the filmmakers and told them who to cast and what scripts they had to do and they took their film away and gave it to other people to edit, so it was not good.

It has been a while since you have put yourself into one of your own films. Why did you decide to narrate ‘Café Society’?
When I wrote this film I wanted the structure of a novel, of a book and I wanted to introduce a family and brothers and sisters, and touch on characters and not make one single story and run it through, but to have more of a panorama over a couple of years with different people. You feel the author’s voice if you’re reading Dickens or you’re reading Saul Bellow. Since I was the author, I felt I was the logical person to do it. I would have been just as happy getting someone else to do it; it was simpler for me to do it, I knew exactly what I wanted. If I got someone else to do it I would have to sit in the recording room with them and say “Could you read that again, and put the emphasis here”, so this was very simple to do.

What was it like for you to shoot on digital for the first time in your career with cinematographer Vittorio Storaro?
Storaro and I were talking and he said “You know the wave of the present is digital” and we were commiserating how much we loved celluloid and all of that, but both of us agreed that the theatres don’t play celluloid anymore and it’s silly to keep hanging back, because the tide of digital filmmaking is washing over us. There is no disadvantage working digitally; it’s the same thing; the camera’s there, you have to light, it takes just as long, you have to do everything the same, but you do have some advantages later because you can do all that digital work. There are many magical things you can do.

You have never been part of the Hollywood system and don’t make your movies through big studios, but instead are working with Amazon on the TV show ‘Crisis in Six Scenes’, as well as your movies. Was that a deliberate choice?
It just evolved that way and it was fine. I have more freedom, I raise the money privately – I don’t need a lot of money to make the movies – then when the film is over we offer it to distributors and distributors are interested in it, they give us some money for the privilege of distributing it and it has worked out very well. This way, when I finish a script I never have to show it to anybody, I never have to get any approval of it, I never have to get approval of casting. I have the money, I make the film that I want to make, and then I hope that people like it. Sometimes they do, sometimes they don’t.

So you are the smart rebel of Hollywood?
Not really, I just accidentally evolved this way. I was very lucky; when I worked in Hollywood – it wasn’t in Hollywood, it was always in New York, but for a Hollywood studio like United Artists – they were very liberal and nice as well. They gave me all the freedom that I really have now working independently. I have been very blessed, very lucky. After a few pictures – the pictures did very well and I had earned the right to say “I want final cut”, but I had final cut by the good grace of the companies. I never had to demand it or argue for it.

‘Cafe Society’ is at Irish cinemas from September 2nd 2016