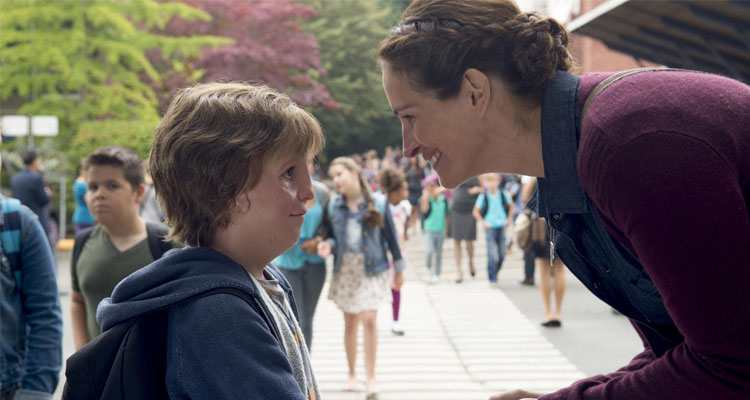 The Plot: Auggie (Jacob Tremblay) isn’t like other kids, but being different is something that his mother Isabel (Julia Roberts) and father Nate (Owen Wilson) teach him to celebrate. Due to a genetic defect, his face didn’t quite work out the way it should have. Having been home-schooled until the 5th Grade, it’s time for Auggie to discover what school with other kids is really like. It’s difficult at first, given that everyone stares at him but doesn’t want to talk to him. He’s bullied and taunted too. However, he makes a friend in Jack Will (Noah Jupe), who defies his schoolmates in learning to accept others, whatever they look like. Isabel’s little Wonder may just find his place in the world at last…

The Verdict: Adapted by Jack Thorne and director Stephen Chbosky from the New York Times bestseller by R.J. Palacio, Wonder is a sweet wonder. It’s a sensitively directed and well acted family drama about fitting in when the world doesn’t quite know what to do with you. That’s something that we can all identify with. It plays out like a child’s-eye version of Mask or The Elephant Man, being a similar story of acceptance and being non-judgmental about people because of the way they look.

Kids can be cruel to each other, but it costs nothing to be kind and to open your heart to someone different to you. That’s something that both kids and adults can take from the film. There’s a theme running throughout the film that it’s better to be kind than to be right. However, this is all done in a careful, non-preachy way that might otherwise have ended up a gooey mess. Auggie is quite a character, wise beyond his young years and with a sense of humour too. Like another recent youth (Maddy in Everything, Everything), he identifies with an astronaut and living in a bubble of sorts.

Chbosky does something rather smart at various points in the film – changing the perspective. We also look at Jack Will’s perspective and that of Via (Izabela Vidovic) who feels neglected because her brother Auggie takes up so much of her parents’ time. We even see the perspective of Via’s estranged former best friend. The idea presumably was to show different perspectives on Auggie as well as showing that people are not always what they outwardly seem. They’re all going through problems of their own. All it takes is an act of kindness to forgive.

There is a flaw in this though – we don’t get to see the perspectives of Isabel and Nate, which would have given a more rounded view of this family. Maybe the running time didn’t quite allow it. It could do with being 15 minutes shorter. However, Wonder is a sweet little film that warms the heart as well as tickling the funny bone. An ideal film for the whole family, as there’s something here to please everyone and a simple message to take home.