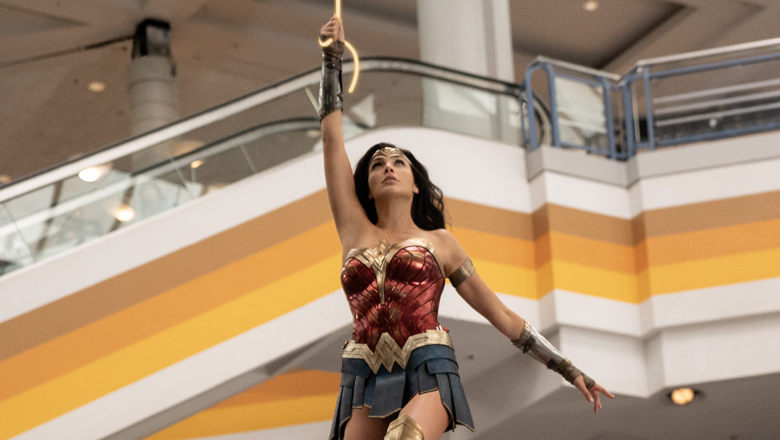 Costume designer Lindy Hemming has designed for many cultural icons, from Batman to Bond & Harry Potter to Lara Croft, and more recently she had the honour of modernising the classic Wonder Woman outfit for the big screen. We caught up with Lindy to chat about her work on ‘Wonder Woman 1984’, which is released in Ireland this week on premium video on demand.

Costume is such an essential part of Wonder Woman. In WW84 she wears a stunning set of golden armour. How did the concept come about?
LH: I hoped that people would like it and they have really taken to it. First of all, we took influence from two of the comics, Kingdom Come and Burning Devastation, where Wonder Woman and her mother, the queen, both wear golden armour. Patty [Jenkins] and I both said it would be fantastic to give Diana different armour to wear at some point, so I started looking into it. I began by researching historical armour. We knew the golden armour belonged to someone who lived hundreds of years before Diana’s birth, so it has to have an ancient feel. I looked at classical history, but none of it seemed right. Ancient Greek armour was too minimal; some of the other classical ones were too clunky and not attractive. I then started mixing elements of historical pieces with 1980s fashion and fashion from today. I saw that designers like Alexander McQueen and Tom Ford had designed pieces that were, in a sense, armour. We decided we could invent our armour. We didn’t need it to be a historical replica. That’s what we did. We went ahead and loosely copied the armour in the stories, but tried to make the body shape look like it belonged to Wonder Woman. It has to tie in with her regular uniform, so we know that this golden suit is now hers, that she was destined to wear it. It was a lot of work, and it took a long time, but it was worth it to hear how much audiences love it.

When you developed the concept, did you work closely with Gal Gadot to see how it fits and whether she can move in it to fight?
LH: We showed her what we were doing, but I have to say it’s complicated with a superhero costume. It is a different type of process because the actor has to trust you more than usual. They need to be able to move with ease. They need to know you and trust you that you’re going to work hard to make it so that it’s light and it’s as flexible as possible. They need to know you will try to build it in the most comfortable way. We made all of the armour pieces in a 3D moulding, printing way from our drawings. We made a beautiful corset which we used to hang the rest of the armour. It hung from either from Gal’s shoulders or from her waist so that it couldn’t start sliding down or falling off her. It looks light and almost like an armadillo in how it moves, but it was secure, which I’m sure she was very glad about. It is also important that she can undress herself or that her dresser can easily help her in and out of it. We designed that if it was dialogue, she could use the top half or if it was leg or feet she could wear the leg armour, which meant she didn’t always have to be wearing that entire thing. 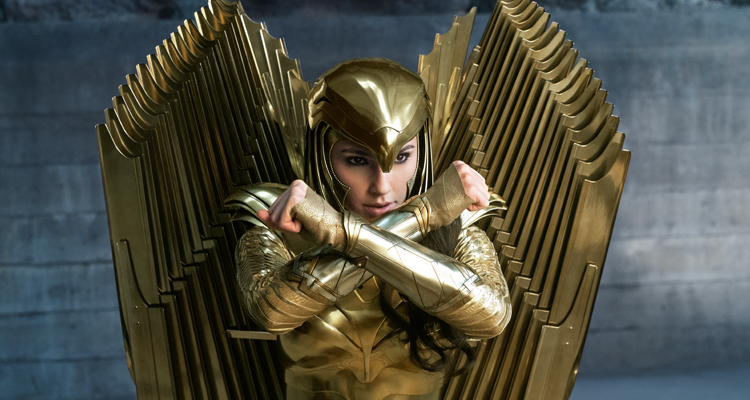 We see such a colour explosion on screen, and Chris Pine is hilarious as Steve navigating 1980s clothes. Did you have a lot of fun bringing the 1980s elements together?
LH: I didn’t have much fun to start with because I really couldn’t get my head around that sequence, but my assistant Nat Turner, who I credit, pushed me and pushed me. He looked in second-hand shops, and he looked online and studied. He remembered the 1980s very well and really enjoyed the work. We pulled all that together between him and me, and we made all of the outfits except for one shirt and a jacket, we found them in a vintage store as far as I remember. We had to have a big work team because we made nearly everything you see on the screen. Chris Pine was screaming with laughter when he had to try on all this stuff during his fittings. It was hilarious. I wish someone had filmed his laughing. His laugh is infectious.

MP: When it comes to creating Barbara’s [Kristen Wiig] look, she goes from this nerdy, uncomfortable girl into this stunning woman. What is it like bringing a character from zero to one hundred?
LH: If we are given the full blessing to do it, our job is to help the actors develop their character through their clothes. Working with Pedro [Pascal], with Chris [Pine] and Kristen, they all had characters who faced changes. You work with them and with the director to design and come up with all these little shifts in the way they looked. Working on a project like this is a blessing; it is the best thing to be given if you do costume design. It is much more exciting than having a film with one type of style or look.

You have an incredible filmography behind you, from Batman to Bond. You have designed for many macho men but with the two Wonder Woman movies you get to create looks for mighty women. Did you enjoy that change of pace?
LH: In the beginning, you know, they’re all actors, you didn’t read much into it. We didn’t think about it so much because we work with many women in the costume department. But, I have to say, as it went along it became like a big sisterhood, and it was fantastic. It was a tremendous feeling to be almost entirely dealing every day with women and girls who are acrobats, sportswomen, and circus performers. All of these people have different disciplines. They are the most amazing collection of people – there was even a lady who was a policewoman. They were all chosen for that physical presence. It was fantastic. It was an unrepeatable experience almost because on the second, WW84, it wasn’t quite the same. There were many more men in that, but the first one was a fantastic experience of being surrounded by and working with women.