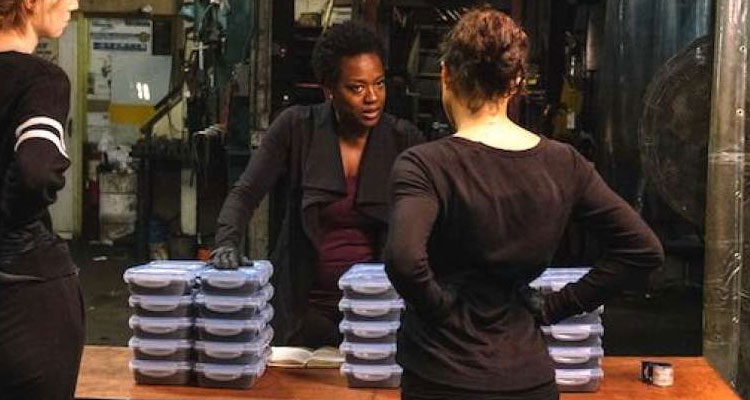 The Plot: Chicago, 2008. The city is gripped in a wave of crime and gun-related deaths. Veronica (Viola Davis) chooses to turn a blind eye to the criminal activities of her husband Harry (Liam Neeson). When he and his crew are (spoiler!) killed in a botched heist, pressure is put on her by politician Jamal (Brian Tyree Henry) who Harry stole $2,000,000 from – which promptly went up in flames during the heist. With a month to get the money together, she goes through a notebook that Harry left behind – his next job. She approaches the widows of the other crew – businesswoman Linda (Michelle Rodriguez) and trophy wife Alice (Elizabeth Debicki) to pull off the job. They’ll need extra help, which is where tough-as-nails driver Belle (Cynthia Erivo) comes in. Doing this dangerous job might mean liberty or death…

The Verdict: Four films in and acclaimed British director Steve McQueen has yet to drop the ball. After socially conscious talking-point films Hunger, Shame and 12 Years A Slave, McQueen turning to more direct genre territory with Widows might sound like him selling out. Far from it actually. Just as the late Stanley Kubrick tested himself in varying genres, McQueen testing himself in crime thriller territory is a bold and strident move. Particularly when you consider what he’s done here with Widows, a Lynda La Plante novel that was previously adapted into a TV series in the 1980s. That was his starting point, but he’s relocated the story to Chicago and given his own distinctive spin on themes of gender, race, identity and political corruption. Themes that he’s touched on his previous films and encapsulates here.

What makes this particular version of Widows so damn good is that it has the meaty feel of a cinematic crime saga, like Michael Mann’s Heat. The actual heist by the women only occupies a small portion of the film. This allows McQueen to build his characters up from grieving widows to empowered women who take back their lives from the men who put them in the shadows and have now left them to pick up the charred pieces. Co-screenwriter Gillian Flynn brings a female perspective on what drives these women to do what they do, giving them a rounded finish as fully three-dimensional characters. They don’t always like each other either, they don’t always agree. They’re thrown together by circumstance rather than choice.

What appears to be a backdrop involving two competing, corrupt politicians moves past any suggestions of a sub-plot and is intricately interwoven into the story of the women. It’s a condensed version of a bigger story but it’s so richly acted by Farrell, Henry and Duvall that it becomes a major plot catalyst. Of course, the women are the real stars here and each of them shine in their own way. Davis is ballsy and driven, Rodriguez is tough and street smart, Debicki finds her own voice and cinematic newcomer Erivo proves that her performance in Bad Times At The El Royale was no fluke. They each spark off each other brilliantly, keeping their characters at a distance from each other but still have a sense of camaraderie.

If you live by the sword, you die by the sword. That’s a theme that runs through this sombre thriller, which leaves food for thought as the credits roll. It’s called Widows for a reason and is removed from the jaunty likes of Ocean’s Eight. That doesn’t take away from its entertainment value though. McQueen elevates what could have been a neatly-packaged, postage-stamp concept into a strong character-driven thriller that stands apart from the crowd. That’s what one would hope for from McQueen, that he pushes the boundaries of the genre and adds his own distinctive contribution. A terrific firecracker of a film that is not to be missed.