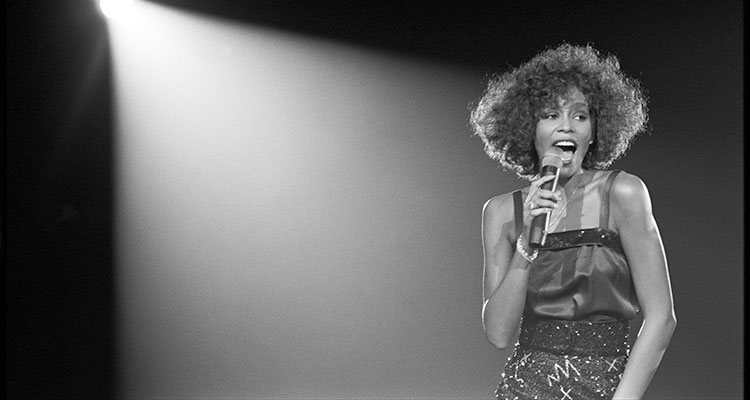 Whitney: Can I Be Me

WHITNEY: CAN I BE ME (UK/USA/15A/105 mins)
Directed by Nick Broomfield, Rudi Dolezal. Starring Whitney Houston, Robyn Crawford, Bobby Brown, Cissy Houston, Bobbi Kristina Brown.
THE PLOT: This documentary charts the meteoric rise and tragic fall of pop legend Whitney Houston. Beginning with her early years as a gospel singer, it became evident that she was a star in the making. Making her first appearance on television at the age of 19, her soulful voice and emotionally-charged performances were an immediate draw. This was despite criticism from the African-American community that her music was not ‘black enough’, being manufactured more for acceptance by white America. Her close friendship with Robyn Crawford also drew attention, as did her reliance on drugs. All of this culminated in a destructive marriage to the bad boy of rap, Bobby Brown, and a desperately sad demise in a hotel bathroom in 2012…
THE VERDICT: You wait five years for a soul-searching documentary on the iconic Whitney Houston… and then two come along. While Kevin Macdonald is working on his version, Nick Broomfield is first out of the gate with ‘Whitney: Can I Be Me’. In a sense, it’s an unauthorised biography of the late singer. Other than archive footage and a few snippets from Whitney’s brothers, there’s no official Houston family involvement here. That’s both a hindrance and a help to Broomfield, who is notable for making confrontational documentaries and tackling his subjects head on.
It’s a hindrance in the sense that we don’t quite get a fully rounded view of what Whitney was going through. There are hints, like an interview where she says that success doesn’t change you – fame does. What pushed her over the edge in the end – lifelong drug abuse that ran in the family or, as someone suggests, a broken heart? On the other hand, it’s a help because we instead get some brutally honest perspectives on how this funny, sparky, talented lady fell so far from the top. Like her ex-Scotland Yard bodyguard (not Kevin Costner) who clearly outlined what was wrong with her life situation to her family and was sent packing for it.
Broomfield assembles a wealth of material, with the centrepiece being previously unseen behind-the-scenes footage from Whitney’s last world tour in 1999. Shot by co-director Rudi Dolezal, it’s revealing – but only to a point. Broomfield is keen to triangulate a perspective on Whitney from the people who knew her best: confidante and rumoured lover Robyn Crawford, who was essentially her pillar of strength; Bobby Brown – who indulged her drug abuse by adding alcohol into the mix; and her controlling and disapproving mother Cissy. While there are narrative gaps here, Broomfield does enough to suggest the power struggle with Whitney caught in the crosshairs.
The thing that comes out the strongest though in this absorbing documentary is Whitney herself. Working for 2 years on the film, Broomfield found that he needed it to be her story in her own words. Whitney’s unflinching honesty in her interviews, rare in a world-famous celebrity, is the thread that runs through the film. You certainly get the feeling that she had so much more to give to the world. A quietly moving documentary that packs an emotional punch.
RATING: 3.5 / 5
Review by Gareth O’Connor