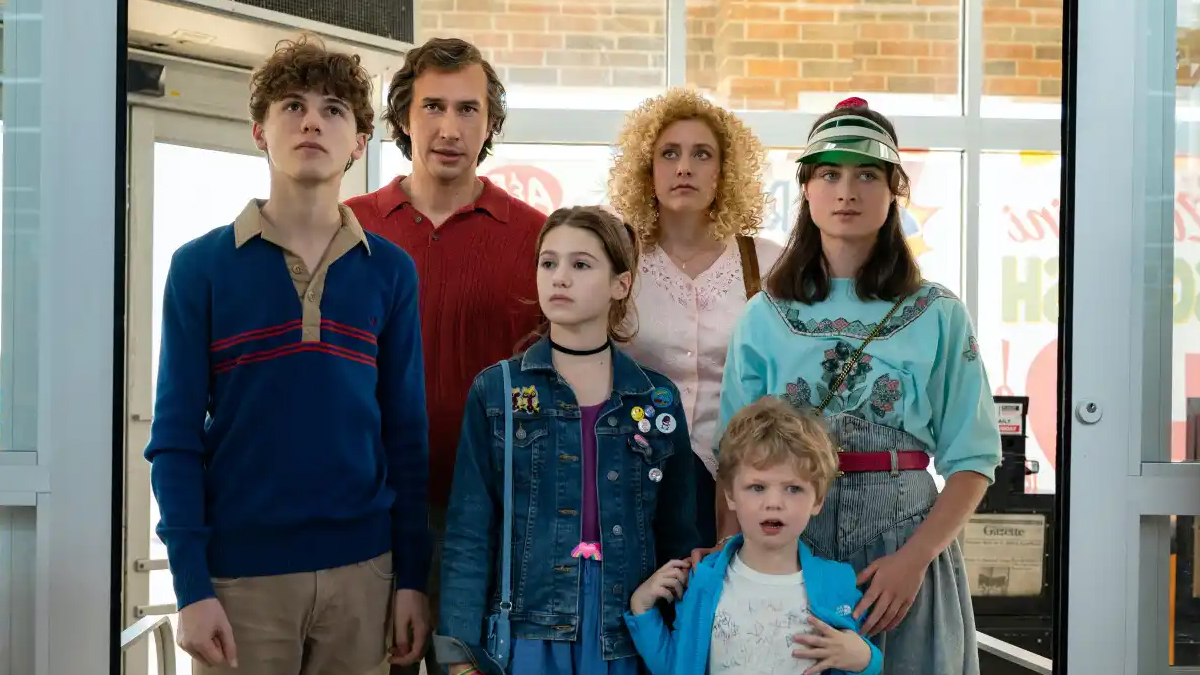 The Plot: Reagan-era America. College professor Jack (Adam Driver) specialises in Nazism, occasionally partnering up with fellow academic Murray (Don Cheadle) who has a fondness for Elvis. Jack lives a comfortable suburban life with Babette (Greta Gerwig) and their children including the observant Denise (Raffey Cassidy). All seems well until a train derailment causes an airborne toxic event, sending the family scrambling for cover. As they adapt to their new reality, Jack soon learns some home truths about himself, his wife and his family that question just what it means to be human…

The Verdict: Trust Noah Baumbach to deliver one last hurrah for cinema this year. While it’s reaching Netflix at the tail-end of the month, his latest film White Noise is entirely cinematic and an exciting step forward for his particular brand of turning the screws on a typical American family. He’s worked many times on family-set stories like The Squid And The Whale and Marriage Story, but nothing quite like this. The Gladney family at the centre of White Noise is a literal nuclear family, facing the physical threat of impending death by toxins, the break-up of the family unit and an existential crisis about how to deal with all the white noise, filter it out and find some sort of meaning and purpose. If that sounds a bit heavygoing to watch and digest, then it’s not really. White Noise is light on its feet, frequently funny and slyly satirical but also serious when it needs to be.

It’s based on the cult 1985 book by Don DeLillo, with Baumbach’s screenplay moving comfortably through the passage of events and breaking it down into a clear three acts. Surely a shoo-in for Best Adapted Screenplay at the upcoming Oscars, his adaptation is witty, surreal, realistic and loaded with some great belly laughs. There’s quite a bit of material to get through involving plots and sub-plots that spin off in different tangents for the characters and their outcomes. However, he knits them all together with the ease of experience in knowing what makes a great screenplay tick – even though this is his first stab at adapting another work by himself. He should adapt more often. He keeps the nuclear family of the Gladneys front and centre as they navigate choppy waters (a river sequence is a highlight), experimental drugs and the constant blast of buy-buy-buy supermarket consumerism in this greed-is-good era.

What makes the film work so well is the considerable ease with which Baumbach slips from one genre into another. There’s drama, action, science fiction, thriller, even a nightmarish slice of horror at play as the events of the film unfold at a clock-ticking pace. Given his stately chamber pieces, the words ‘Noah Baumbach’ and ‘action sequence’ don’t exactly go together and yet here he is doing Dukes Of Hazzard-style slo-mo shots with jumping cars – typical of 1980s entertainment. It’s mildly amusing to watch him break out and try something different, but he does so knowing what his end goal is here. He’s showing that the American Dream is there for the taking, but it’s also a cracked mirror reflecting the ugliness of the world around it. This is best exemplified in the very different attitudes towards life of Jack and Babette, with Adam Driver and Greta Gerwig going full tilt into their characters and environment. Gerwig’s upcoming take on Barbie should be particularly interesting after seeing White Noise.

If there’s one fault here, it’s that the third act is a little unfocused and lacks the character detail that made the earlier acts so well defined. It plumbs the murky depths of experimental drugs but doesn’t seem as urgent as it should be. However, Baumbach quickly recovers, moves past this issue and goes out on a high note to one of the most memorable end-title sequences of the year. White Noise is the title of the book, but the film is anything but white noise. It’s sharply-made, well-acted, thrilling and funny in equal measure. Tune into its unique frequency and prepare for a wild, multi-genre ride.

In short: Tune in