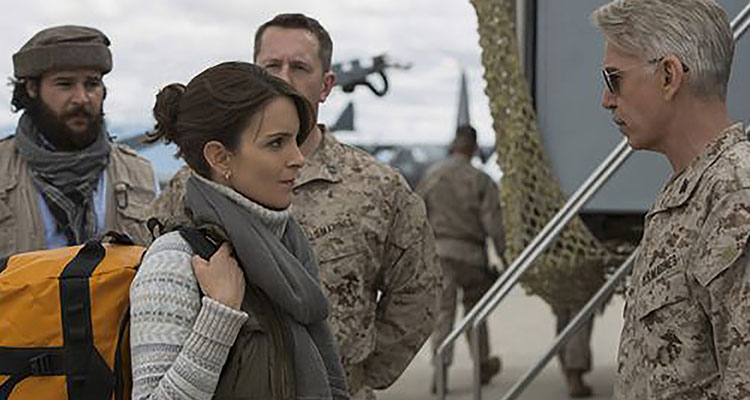 WHISKEY TANGO FOXTROT (USA/15A/112mins)
Directed by Glenn Ficarra, John Requa. Starring Tina Fey, Margot Robbie, Billy Bob Thornton, Martin Freeman, Alfred Molina.
THE PLOT: In 2001, journalist Kim Barker (Tina Fey) finds herself in Afghanistan, covering the war from a considerably quieter place than the war-torn Iraq. As such, friendships and allegiances grow up in the international community stationed in Kabul. As the Taliban grow stronger and interest in the country receds however, Kim finds herself fighting for her job, and the new relationship that has developed between her and Scottish photographer Iain (Martin Freeman).
THE PLOT: ‘Whiskey Tango Foxtrot’ – of course an allusion to the abbreviation WTF – is based on the real life memoirs of Kim Barker who was stationed in Afghanistan for several years. Although there is plenty of absurdity to laugh at, in trying to make the story a comedy, ‘Whiskey Tango Foxtrot’ feels uneven and rather like it is trying too hard.
Tina Fey leads the cast here as Kim Barker, a journalist who at first feels like a fish out of water, before becoming too used to the new world she finds herself in. Fey is charming as usual, and carries the film ably. Margot Robbie plays competing journalist Tanya, and this may be the first time the actress has played a character who does not rely on her beauty to get what she wants, but is cunning and smart. Martin Freeman takes a step away from playing the affable everyman to play a rather more caustic character, and the rest of the cast features Billy Bob Thornton, Alfred Molina and Josh Charles.
Robert Carlock’s screenplay plays with the absurd conditions that these journalists found themselves in in Kabul, while making sure to show off the fact that their arrogance in the field often caused more harm than good. There is definite emphasis put on the fact that these reporters get too comfortable in the “Kabubble” and forget that people’s lives are in danger just outside the walls of their home, but the trouble is that while there are a few laughs at the start of the film, the comedy quickly stops coming, leaving the film feeling uneven and slightly awkward.
Directors Glenn Ficarra and John Requa, whose previous films include ‘Focus’ and ‘I Love You Phillip Morris’ struggle with the pacing of the film, as the middle section feels flat and the beginning too rushed. The performances are strong enough to make the film work, but the lack of a strong vision in terms of tone – is this a comedy or not – means that the film ends up feeling less clever than it thinks it is, and rather more messy.
In all, ‘Whiskey Tango Foxtrot’ is a comedy that’s not really that funny. There is a story to be told about the journalists who embedded in Afghanistan then forgot where home was, but Whiskey Tango Foxtrot is not it. Still there are some laughs at the start, Martin Freeman obviously has fun and Tina Fey is infinitely watchable, so ‘Whiskey Tango Foxtrot’ isn’t all bad, just a little uneven and badly paced.
RATING: 3/5
Review by Brogen Hayes