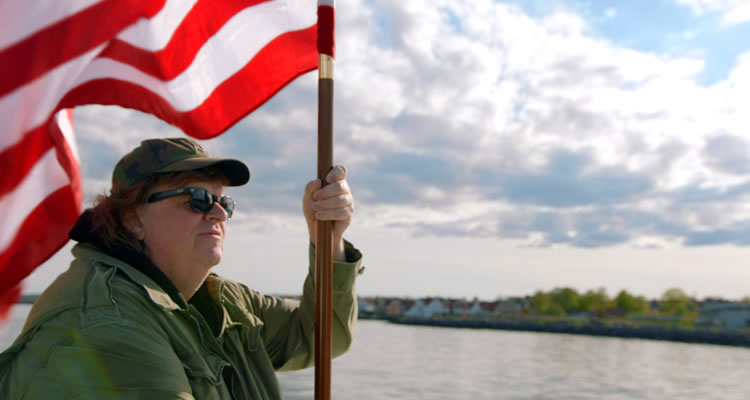 Where to Invade Next

WHERE TO INVADE NEXT (USA/15A/120mins)
Directed by and starring Michael Moore.
THE PLOT: Michael Moore, in the context of the US going to war in Iraq to gain control of the nation’s oil, goes on a journey across the world to find out where the US should invade next, to take home the best ideas on education, working hours, prisons, fighting drugs and women in power. The results are not all that surprising, but are definitely illuminating.
THE VERDICT: It has been some time since Michael Moore’s last film was released in cinemas, so it is easy to wonder just what the documentarian has been doing since ‘Capitalism: A Love Story’ in 2009. Turns out, the director and filmmaker has once again been shining a light on the most problematic areas of the US, by heading away from his home country, and finding out which countries have better systems than the US, and which ideas he can bring home to improve life for every day Americans.
As usual, the tone of Michael Moore’s film is comedic and light, being as it is framed in the (fictional) idea that the Joint Chiefs of the US have sent Moore on a mission to “invade” other countries. As he travels through Germany, France, Italy, Tunisia, Norway and Iceland, Moore looks at the systems these countries have in place to benefit their people, and compares them to similar situations in the US. This is all well and good, as Moore has set out to find ways that the quality of life of the average American can be improved – and this is certainly interesting in the context of this being an election year – but the trouble is that the people who are going to see this film are the ones who already know that improvements can be made. So then the question becomes, who is this film for?
As Moore travels around the world, the pattern of women being in power and this being better for the country emerges. This could well be seen as a hint toward Moore supporting the election of Hillary Clinton over Donald Trump, but this seems moot as none of Trumps supporters are going to be interested in seeing such a liberal film, especially one that explicitly says that America may be a great country in some ways, but there are improvements to be made. As well as this, Moore’s film over simplifies the issues – even as he says that there are no quick fixes to America’s woes, and the Portuguese Minister for Health agrees with him – but Moore certainly makes sure that he is asking the right questions; questions that could go a long way to starting a bigger conversation. With a running time of 120 minutes, however, ‘Where To Invade Next’ runs out of steam about halfway through, which the film then struggles to claw back in the end.
In all, Moore’s film over simplifies the solutions to the problems facing the average person in the US today, but it asks all the right questions to get the audience thinking and talking about change. Although this film may not have a huge impact on the US, it is definitely worth looking at from an Irish point of view, and wondering how these strong, people led, dignified policies from around the world could be applied here at home.
RATING: 3.5/5
Review by Brogen Hayes