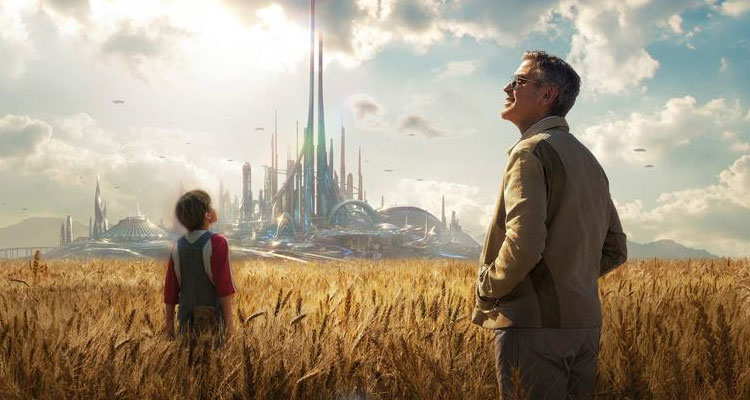 What to expect from Brad Bird’s TOMORROWLAND

So, still not sure what the hell Brad Bird’s ‘Tomorrowland – A World Beyond’ is all about? Well, move closer – We’ve got the lowdown from Bird & co-writer David Lindelof. Today.

With ‘Tomorrowland’ you’ve got director Brad Bird, the man behind ‘The Incredibles’, one of the coolest retro-future movies of all time, and who also miraculously gave Tom Cruise a hit with 2011’s ‘Mission Impossible: Ghost Protocol’. Also, in the lead role as a dashing-but-depressed Doc Brown figure, the always-likeable George Clooney. Throw in the slow release of information, through teaser trailers, apps and Expo appearances, and the future never looked so promising.

Part of the attraction is the simple fact that no one seems to know what the movie is actually about yet. Other than the basic plot outline of Clooney’s former boy-genius Frank Walker and newcomer Britt Robertson’s wide-eyed teenager Casey Newton being on a mission to find this mysterious, eponymous place that exists somewhere between time and space.

Having started life as an attraction at Disneyland in 1955, Tomorrowland’s portrayal of an optimistic space-age future had turned darker by the hangover decade that was the 1970s, and it was this shift that intrigued Damon Lindelof, co-creator of the TV series Lost, and the man initially tasked with coming up with a script for this big-screen adaptation.
“I really wanted to capture that earlier optimism,” says Lindelof, his enthusiasm sparked by the discovery of a box labeled from 1952, found in a closet at the Disney Studios, and containing material related to the inception of Tomorrowland and the 1964 World’s Fair. “I began to imagine that the contents of the box were a guide to a secret story that nobody knew. But if so, what would that story be? And the most obvious answer to me was that there really was a place called Tomorrowland that was not a theme park but existed somewhere in the real world.”

Having been greenlit by Walt Disney Studios in June 2011, the rumours and speculation went into overdrive straight away. Bird had to deny claims that ‘Tomorrowland’ was related to Disney’s reboot of the ‘Star Wars’ franchise, using the opportunity to reveal that it was a science fiction film. In January 2013, Lindelof added that the film was not about extraterrestrials.

And then came the mysterious box. Inside, there were archival photographs of Walt Disney, Technicolor film, envelopes, a vinyl record, space technology literature, a 1928 copy of Amazing Stories magazine (the issue that introduced the world to Philip Francis Nowlan’s Buck Rogers character), and an unidentified metal object. It was this box that Bird and Lindelof brought to D23 Expo (Disney’s answer to ComicCon) for their presentation, later leaving the items on the show floor for closer inspection by the great unwashed. At the same time, an iPhone app was released, taking the viewer through the exhibit.

Not that a shabby old box is the main selling point of ‘Tomorrowland’. When it came to the casting of leading man Frank Walker, both Bird and Lindelof only ever had one man in mind. “From very early on, we described Frank as George Clooney-esque,” explains Lindelof. “And whenever we would talk about actors for Frank, the thinking was, who’s like Clooney? We crossed our fingers and did our best job of writing it, infusing Frank with a curmudgeonly humour and a heroic quality…”

Lucky for Bird and Lindelof, they had Clooney at ‘curmudgeonly’, the actor describing Frank as “a disenchanted grump who was a bit of a dreamer as a young boy, a smart little scientist kid. Young Frank goes to a place that he thinks is the greatest in the universe and he believes the world is going to be much better off because of it. He finds out that those things were untrue and he becomes probably the most cynical person one could be. He isolates himself on his family farm and plans to spend the rest of his life there, but is forced to deal with his past…”

For Bird, his hopes for ‘Tomorrowland’ are clearly not just about a night out at the cinema. “We hope audiences will be entertained,” says the two-time Oscar winner, “but, with luck, we’ve also made something that will give them something to talk about and think about later… Maybe even start to imagine a different kind of future.”