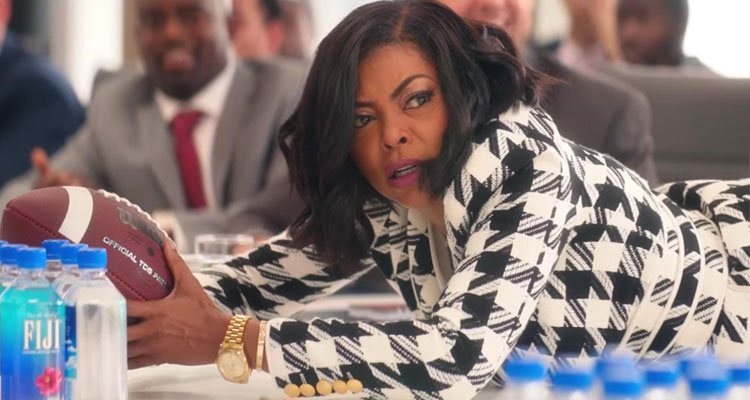 The Plot: Ali (Taraji P. Henson) has a fiercely competitive streak. She needs to in the cut-throat, male-dominated world of sports management. She’s passed over for a promotion by her boss, who bluntly tells her that she doesn’t relate to men in the way that she should. Frustrated, she seeks help from a psychic. A mixture of some magic potion and a bump on the head results in Ali being able to hear the inner thoughts of every man around her, starting with her loyal assistant Brandon (Josh Brener). She then moves on to dishy barman and single dad Will (Aldis Hodge), who is amazed at her bedroom skills. Armed with her secret knowledge, she sets out to change her reputation…

The Verdict: What Women Want is a dimly-remembered Mel Gibson comedy from 2000, but it had some fun with its amusing, only-in-the-movies high concept. Fast forward nearly two decades later and the battle of the sexes climate has changed – for the better – in the wake of #MeToo. The answer: remake it as a gender-flipped film and turn the tables on men this time around. It could be a story of female empowerment, about a talented, sassy woman making waves and striking out on her own in a male-dominated world. A workplace comedy that is sharp, observant and on-the-money, while poking fun at the differences between men and women. Well, that was presumably the intention of director Adam Shankman and his four credited writers. Instead, meet the rubbish version of it in the unloved, flabby form of What Men Want.

Everything about this film screams of desperation. We’re introduced to go-getter Ali, whose only motivation in life seems to be about success. Stuck in a boys club, she wants to prove to everyone that she’s just as capable as them. The script conveniently ignores the fact that she’s already quite successful and, despite her boss putting her down, she gets on well with men actually. How else could she have survived in her company? She’s an over-the-top character, who hasn’t been introduced to the word ‘subtlety’. Or maybe she doesn’t come with an off button. It’s hard to know, given how poor the script is at fleshing her out and making her a relatable and likeable character. It’s not helped by Henson’s childish performance, which turns what could have been comical sex scenes into just plain bizarre. She’s actually a decent leading actor, but has a habit of picking mediocre films (Proud Mary, No Good Deed) to feature in. She needs to have a word with her agent – fast.

Equally desperate is Shankman’s failed attempt at edgy humour by upping the rating of this remake and introducing lots of fruity language. If you’re expecting more, you’ll be sorely disappointed. Why not go the whole hog and make the most of the more adult rating? In attempting to be sweet and meaningful, Shankman creates an uneven tone. The result is a film that bounces around being edgy but also tries to work within the defined standards of the modern romcom. The two don’t gel together here, so the film also fails to raise more than a sporadic light chuckle. Real laughs are beyond the reach of the feeble script, which questionably portrays men as being mostly dim and sex-obsessed. Right. A ‘comedy’ that can’t make you laugh is in real trouble. The pacing is also problematic, taking too long to get to the main joke. There’s no reason for a film like this to be nearly 2 torturous hours long. What do men want? Not this crud anyway. Avoid.