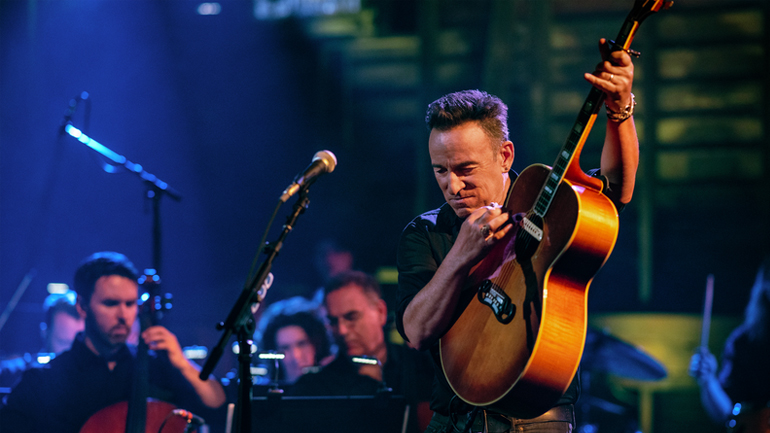 There really is only one way to truly experience Bruce Springsteen’s new album ‘Western Stars’  and thats on the big screen. No other medium can do justice to the beautiful cinematography or gorgeous melodies in this new documentary that weaves archival footage and Springsteen’s personal narration with song to tell the story of ‘Western Stars’.

This special cinematic event in cinemas on October 28th offers fans across the country their only opportunity to see Springsteen perform all 13 songs on the album, backed up by a band and a full orchestra.

We caught up with longtime collaborator Thom Zimny. who directed the film alongside Springsteen himself.

You have worked with Bruce Springsteen on several projects. What is it about Bruce that keeps drawing you back to work with him?
I keep working with him because every time is different. I never know what to expect. You have to prepare before you start something with him. Like with Western Stars, I did my prep work, but then you go on a journey with him. This was different again because its new music, so it’s completely unknown territory. You want to capture the music and help tell the story of it, but he’ll throw a surprise at you. For this, it was the fact that he wanted to co-direct with me and that he wanted to film it in the Barn, which is an old barn on his land. He keeps things fresh and interesting and everyone around him has to be quick and catch up.

So, he keeps you on your toes?
Exactly that. With this when he said he wanted to bring a full orchestra into the barn, you wonder how it will work, but then you find yourself on this ride with him. Next thing you know he is scoring the movie; he is doing voice over. We were creating something that isn’t a concert film and that isn’t a documentary. It’s not a typical making-of approach. It is a genre in itself. The only way you get there with Bruce is to expect constant motion and trying out different things. You start a journey with him and you will always be surprised where you land.

It’s part concert film, part retrospective into Bruce’s career, and part insight into the new music. How did you approach it logistically?
The first idea was to film the whole album from beginning to end as a concert, but early on Bruce said he wanted something different. We talked about doing a series of interviews mixed in, we tried it but we didn’t like the tone of the interviews. One night I got a call from Bruce, he was up late and he had written a scripted voice over for the concert. It said it dug deep into the themes of the album. He wanted me to come over and set up an edit room at the studio to record the narration and that became the journey of the film. It turned Western Stars the concert video into something completely different, it is a concert film but it is also a reflection on Bruce’s life and a deep look at the meaning of the songs on the album.

The backdrop of the narration is old photos and videos of Bruce and his family. Did you work together to choose the images you used?
We spent hours together in Bruce’s home studio going through old photos and footage. We didn’t set out with a look in mind, but we stumbled across the right look, the right image, and the right sense of community and ritual. We also used photos from Bruce’s personal collection, photographs that weren’t taken by a professional photographer so they aren’t photos of Bruce Springsteen the rock star or the icon, but Bruce the father, Bruce the partner. These brought everything to another level and brings the film to this very personal level. I’ve never worked on anything like it. The film goes from these deeply personal moments to a full concert song. It makes it different from anything I have ever done with Bruce in the past.

How long did it take to find the right images to accompany the narration?
The film was an intense process and to be honest it became a bit of a blur. It was like stepping into a dream or a cave. We’d spent six, seven days a week in the editing room. We watched hundreds of hours of home video and went through hundreds of hours of archival footage looking for the right images to demonstrate the ideas of the music or the truth of Bruce’s voice over. It took a long time to find the right images that added to the story without telling the whole story and drive the story forward.

The cinematography is beautiful, particularly the landscape shots we see when Bruce is talking to us about his life. Did you have a vision of what it look like before you started filming?
I love to collaborate and with this the cinematographer, Joe di Salvo, in particular. He was unique in his visual palette. He worked closely with Bruce and I. We would supply him with imagery, ideas, paintings, and cinematic references. All of this went into a giant pot, as it were, and then Joe added his aesthetic. This collaboration helped us create a dream world that we wanted the film to be. When you see the desert landscape it evokes something, a feeling that relates to Bruce’s narration.

Directors are known for having a singular vision. Did you find it hard to have co-director?
I started my career as an editor so I learned early on the importance of collaboration. Since I’ve become a director, I’ve held on to that so when it came to co-directing with Bruce, I felt totally comfortable. I didn’t need sole ownership. I was smart enough to get out of my own way and hear fresh ideas. Bruce brings so much to the table and brings a lot of trust so I am enormously grateful for his role in sharing this film with me. He has inspired me which is a perfect place to be for a filmmaker who wants to make many more films and have many experiences.

Do you think it would be a good idea for all directors to spend some time in the editing room to see things from a different perspective?
I love learning from the people that I work with  and I certainly learned early on of the power of collaboration so I do think it’s good to see how other things work. When it comes to Bruce and Jon [Landau – Bruce’s manager] I’ve learned so much from watching them work together and from seeing how they create things. They work so well in partnership and they have a great friendship. I’ve learned a lot from them.

You have made documentaries about Johnny Cash and Elvis Presley. Are there any similarities between Cash, Presley and Springsteen?The one thing they have in common is being touched deeply by music very early on in their lives and how important music was to their lives. They also all had a desire to push their music in different directions. Johnny Cash tried new ways to approach his music, he created concept albums, he wouldn’t be tied to one type of genre. He had that in common with Bruce. Bruce’s music is always a surprise like on Western Stars which is a new sound, a new palette.

Western Stars ends with Bruce singing Rhinestone Cowboy, was that another of his surprises?
I remember the moment when we came to the last song and Bruce said we need to shake things up a little and end on a happier night. The next thing I know Bruce is singing Rhinestone Cowboy and I knew it was the perfect song to end on. I wish it had been my idea, but it was also Bruce and so spontaneous. My job became about capturing these moments in a way that made sense for the movie.