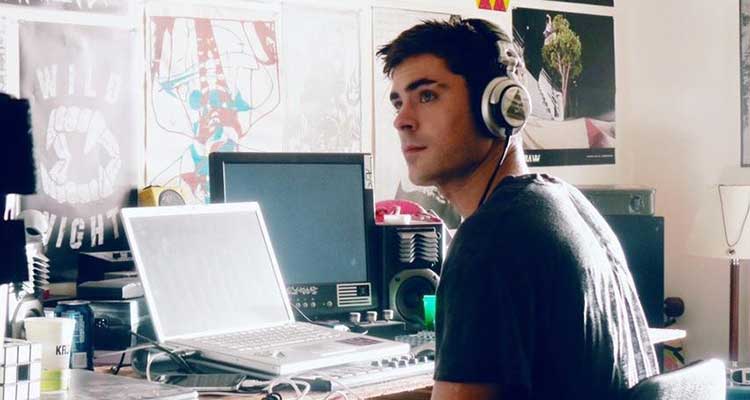 We Are Your Friends

WE ARE YOUR FRIENDS (UK | France | USA/16/96mins)
Directed by Max Joseph. Starring Zac Efron, Wes Bentley, Emily Ratajkowski, Jonny Weston, Shiloh Fernandez, Alex Shaffer, Jon Bernthal
THE PLOT: Cole Carter (Zac Efron) wants nothing more than to be a successful DJ. In order to do this, he knows he has to just create one fantastic track. Cole befriends the hugely successful Paul Reed (Wes Betley), and as the two work on Cole’s killer track, Cole becomes closer to Reed’s girlfriend Sophie (Emily Ratajkowski).
THE VERDICT: There is something familiar at the heart of Max Joseph’s WE ARE YOUR FRIENDS – named after a track by Justice Vs Simian – but although we may have seen this story in various different guises over the years, there is enough charm and good humour here for the film to work on it’s own.
Although the character is slightly generic, Zac Efron is warm and engaging in the lead role as Cole; he quickly gets audience sympathy on his side and, even though he loses it at times, he quickly gains it back. Wes Bentley is on fine form as the alcohol and drug addled success who has got lost in his own myth, and delivers brilliant lines such as ‘A spliff!? What are you, French?’ with humour and wit. Emily Ratajkowski plays Sophie well enough; she has her wits about her for the most part, but rarely comes off as anything other than vanilla. The rest of the cast is made up of Jon Bernthal, Shiloh Fernandez, Jonny Weston and Brittany Furlan in small but rather hilarious role.
Max Joseph and Meaghan Oppenheimer’s screenplay just so happens to be about a DJ from the San Fernando Valley in LA trying to make it, but in reality, could be about anyone trying to make it anywhere. The tale of a man taking a day job he hates in order to make rent is a rather familiar track, as is the story of a group of friends torn apart when someone new comes into the mix. All of this familiarity is saved through the lead character being just charming and engaging enough to keep the audience interested, plus some wonderful scenes where paintings come to life and Cole explains his life through voice over and on screen graphics. The film is a story about growing up and letting go of the dreams that are holding the characters back, as well as fighting for the ones they believe in, while dancing and drinking the night away with pretty people in pretty places. This is a delicate balance done well, and the final moment of redemption is an engaging and touching one, with everything tying up neatly but in a poignant way.
As director, Max Joseph allows WE ARE YOUR FRIENDS to flow along at a decent pace. The music is strong, the sets and costumes bright and colourful, and the relationship between the three central characters is engaging. Ideas come and go, however, with the stylistic touches being dropped fairly soon into the film; this allows the film to focus on the story being told, but also makes it feel more generic than it needs to.
In all, WE ARE YOUR FRIENDS is light enough and fluffy enough to be entertaining and, although there are moments of darkness, they never seem to massively impact on the characters. Zac Efron and Wes Bentley are on great form, the music is strong and, although we have seen stories similar to this before, WE ARE YOUR FRIENDS is bright and colourful, and well directed enough to bring the audience in once more.
RATING: 3/5
Review by Brogen Hayes