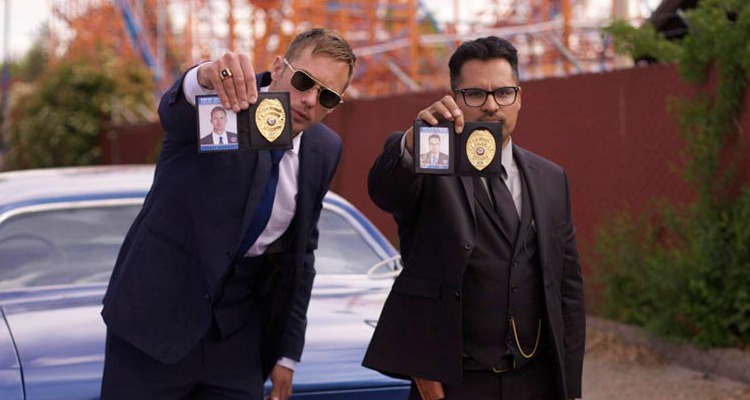 WAR ON EVERYONE (UK/16/98mins)
Directed by John Michael McDonagh. Starring Alexander Skarsgard, Michael Pena, Theo James, Tessa Thompson, Caleb Landry Jones
THE PLOT: Corrupt cops Terry (Alexander Skarsgard) and Bob (Michael Pena) celebrate their return from suspension by getting back to their old ways of extortion, bribery and generally breaking every law they can. When they cross paths with Lord Mangan (Theo James) however, it seems they have finally met their match.
THE VERDICT: After a turn toward drama with ‘Calvary’, John Michael McDonagh returns to drug fuelled comedy with War on Everyone; his first film not to be shot in Ireland or star Brendan Gleeson. Although McDonagh tries his best to make this absurd and over the top comedy work, the final result is puerile, offensive and unfunny.
Alexander Skarsgard leads the cast here as the vile and racist Terry. Walking with a hunch for much of the film, Skarsgard tries his best to make his double act with Michael Pena work, but since neither one takes the role of the straight man, and both try to be as offensive, racist and misogynistic as possible, this rarely works. Theo James plays an equally repellent character in Lord James Mangan, and succeeds in making the audience root against him, and Caleb Landry Jones plays Birdwell, a character who looks as though he was rejected from The Kinks and speaks almost unintelligibly. The rest of the cast features Tessa Thompson, David Wilmot, Malcolm Barrett, Derrick Barry and Keith Jardine.
The screenplay, written by John Michael McDonagh is, quite frankly, a mess. The only motivation for the characters appears to be the fact that they can get away with being abhorrent and racist, and although the film tries to be an equal opportunities offender – racist, misogynistic, homophobic and violent – the fact that the characters get away with being horrific human beings implies that their actions are OK and should be accepted. The dialogue is peppered with insults throughout, which start off as mildly amusing but quickly become tiresome. The story of the film is unintelligible, with drug dealing, murder and child abuse cropping up but barely being explored, so as well as being objectionable, the film makes little sense.
As director, McDonagh seems to have been inspired by music, and there are times when this works very well in the film – especially the John Cena Walkout Theme and Rhinestone Cowboy – but musical montages do not make for a strong film. Add to this explosions of violence and scenes that seem to have been inserted just for the sake of a joke – including a whole subplot of a trip to Reykjavik – which undermines the attempts at story throughout the film. As well as this, the pacing is a mess, characters are never truly explained and subplots are muddled and unclear.
In all, ‘War on Everyone’ is an objectionable film about corrupt cops. The film is puerile, tiresome and unfunny, although it tries valiantly to be a comedy. None of the cast particularly deliver and the pacing, story and delivery are a mess. ‘War on Everyone’ should have been McDonagh’s return to form, but is more disjointed and messy than ‘Calvary’, and that’s saying something.
RATING: 1/5
Review by Brogen Hayes