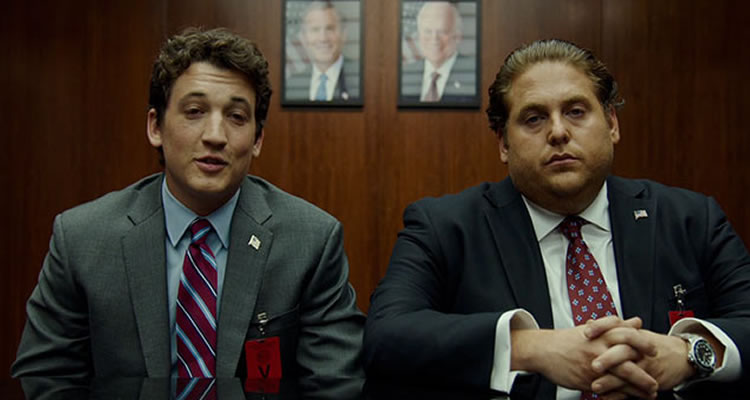 WAR DOGS (USA/15A/114mins)
Directed by Todd Phillips. Starring Jonah Hill, Miles Teller, Kevin Pollack, Ana De Armas, Patrick St. Esprit
THE PLOT: Ephriam (Jonah Hill) and David (Miles Teller) were best friends in juniour high, but lost touch. When the two reconnect at a funeral, Ephriam brings David into his world of high stakes arms dealing to the US government, and it is no t long before the two are raking in millions of dollars in profits, and doing everything they can to make sure their income keeps getting larger.
THE VERDICT: ‘War Dogs’ marks the first time that director Todd Phillips has taken on a drama flick, and although it could be said that ‘The Hangover’ films, toward the end, were a war on comedy, a film dealing with war – or rather, the spoils of it – is also new territory for the director. The trouble is that ‘War Dogs’ should be a black comedy, and could have been in different hands, but as it stands, this true story is rather boring and ultimately, dull.
Miles Teller and Jonah Hill take on the lead roles in ‘War Dogs’, with Hill looking more and more like Marlon Brando toward the end of his life. This comparison also feels apt as Hill plays Efraim, the godfather of this caper; the man who pulls David (Teller) into the world of international arms dealing. Hill seems to base most of his character on an annoying and rather jarring laugh, but doesn’t do much else to make the character feel rounded or whole. Miles Teller plays the one with the morals in the film, but other than some early reservations, he doesn’t make the character much more sturdy than Hill’s. The rest of the cast features Kevin Pollack, Bradley Cooper and Ana De Armaz in smaller roles.
Based on the Guy Lawson Rolling Stone article “Arms and the Dudes”, the screenplay for ‘War Dogs’ was written by Stephen Chin, Todd Phillips and Jason Smilovic, but in expanding the story from an article, the film runs into trouble. War Dogs should be a black comedy about how two young men find themselves at the heart of international arms dealing – or at least have the light hearted tone of the original article – but although attempts are made to convey this, the voice over of the film murders any tension created in the film, and the characters are so unlikeable that it is hard to root for them when their legal dealings turn illegal.
As director, Todd Phillips tries to keep the film moving at a decent pace, but doesn’t do much in terms of establishing characters. The audience is never given a chance to root for these characters who find themselves wildly out of their depth; any morals that David has at the start of the film seem to disappear, and it is always obvious that the charmed life of beautiful apartments and fast cars is never going to last. There is a sense of fun that is missing in ‘War Dogs’, and without it, the film falls flat.
In all, ‘War Dogs’ does its best to be a caper about two kids who find themselves dealing arms to the US government, but it is never as fun as it should be, and it is difficult to root for the greedy and obnoxious characters at the heart of the film.
RATING: 2/5
Review by Brogen Hayes