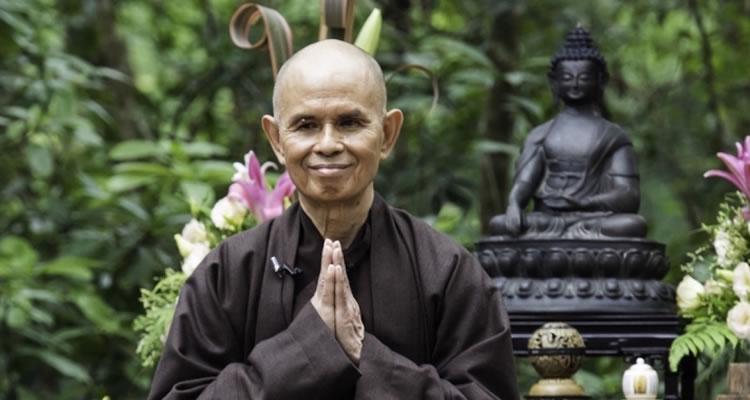 WALK WITH ME (UK / Club / 94 mins)
Directed by Marc J. Francis, Max Pugh. Starring Thich Nhat Hanh, Benedict Cumberbatch.
THE PLOT: In this observational documentary, we follow Zen Buddhist Thich Nhat Hanh and his fellow monks and nuns as they practice mindfulness – the state of living in the moment, rather than dwelling in the past or dreaming of the future. After an initial section in Hanh’s Plum Village monastic settlement in France, the film takes to the road in the US as they spread the word and help to heal…
THE VERDICT: Here’s an intriguing proposition to kick start a New Year at the movies. A documentary that is as reflective as its subjects, showing rather than telling. Thich Nhat Hanh fled Vietnam in the 1960s, concerned by the violence around him. He became an exile in France, where he is credited with bringing the practice of mindfulness to the west. To the uninitiated like this reviewer, the film had the potential to be a preachy sermon or an extended self-help trailer. Instead, it’s more of a chilled-out meditation, a prompt to down tools and reflect on your life.
The shaven-headed monks and nuns of Plum Village have cast away material possessions to enjoy the natural world and the company of each other. It’s a simple idea which is intimately captured by co-directors Marc J. Francis and Max Pugh through the use of close-ups and the kind of nature cinematography (trees, clouds, gurgling streams) that would make Terrence Malick clap hands in glee.
There’s no real story per se, which can be a bit frustrating on a narrative level. Perhaps influenced by the monastic life of living in the moment, the co-directors have chosen not to dwell on Hanh’s backstory or to follow any one monk or nun’s journey to mindfulness. It’s more of a loosely-structured take on observation and meditation. Even Hanh is sketched in light strokes as a mystical, Yoda-like figure (referenced not once but twice). A highlight of the film is when he tells a young girl about how to deal with the loss of her dog. It’s enough to say that it involves clouds and tea cups. She wouldn’t get that kind of depth in school.
Interspersed through the film are readings by Benedict Cumberbatch from Hanh’s book ‘Fragrant Palm Leaves’, which gives you some insight into his teachings and is accessible enough for the uninitiated. The film doesn’t try to be anything more than what it is though. You might find it enlightening or you might find it provokes yawns, like the restless young monk who we observe early on. However, it’s commendable that the film manages to be thought-provoking all the same. Not essential viewing, but one for the curious or the initiated.
RATING: 3 / 5
Review by Gareth O’Connor