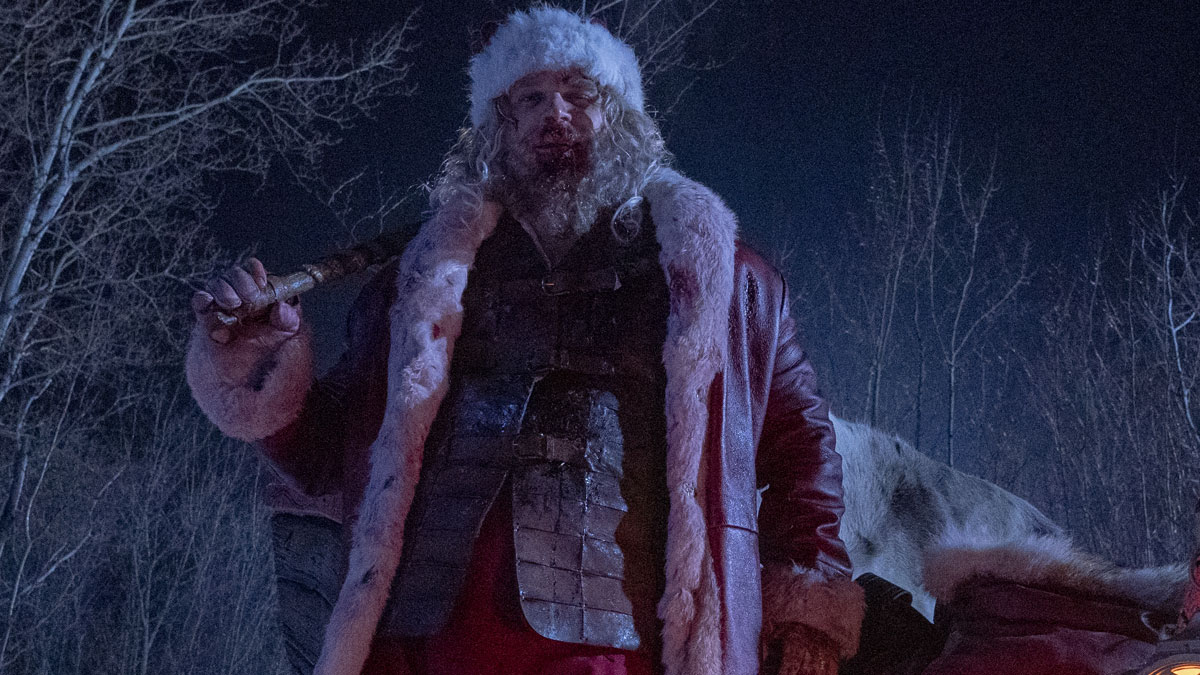 The Plot: It’s Christmas Eve and the Lightstone family have gathered once again at their high security mansion to have some Christmas cheer – if they can get in the mood. Almost constantly at each other’s throats, this family is on the verge of a nervous breakdown. This is all too obvious to the youngest member of the family, Trudy (Leah Brady). Her parents Jason (Alex Hassell) and Linda (Alexis Louder) are going through a rough patch, not helped by the holiday season. When ambitious Mr. Scrooge (John Leguizamo) and his team of mercenaries break into the home in search of some serious loot, it seems that they have an unexpected adversary – Santa Claus (David Harbour). The real one…

The Verdict: Trailers for a film can be deceptive. They pack in the best snippets of the film and give you a taste of things to come in the hope of luring you in. But as with the infamous Grindhouse trailers of yesteryear, they promise so much but actually deliver so little when it comes to the final product. That’s an interesting touchpoint for Violent Night, given that it veers dangerously towards being an exploitation film. The kind of nasty little shocker that gets some laughs out of its crass, over-the-top violence (of which there is plenty here) but on closer inspection really has little to say and is as disposable as an opened Christmas cracker. The banger is still there, but the joke is as corny as hell and the trinket isn’t worth mentioning. Where did such a good trailer go wrong in the final edit? Not to mention that the best line in the trailer isn’t in the film (‘Time for some season’s beatings’).

Co-writers Pat Casey and Josh Miller have to shoulder a good portion of the blame here. Their script leans far too heavily into a Die Hard tone and even cheekily namechecks it along with Home Alone. There’s little of the sharp sophistication of that stone-cold action classic though. It’s all rather blunted. Santa Claus isn’t just coming to town here. He’s going to town on the numerous bad guys who keep multiplying as the richest family in America also turns out to have the worst home security and employee loyalty scheme. Did anyone do background checks? This isn’t the Coca-Cola Santa Claus and maybe just so for copyright reasons. David Harbour portrays him as a dishevelled, vomit-friendly near-drunk. His Santa Claus has the kind of colourful backstory that suggests he was a distracted extra on The Northman and wandered off the set and onto a different Universal soundstage. It’s an odd casting choice, but he just about manages to hold it together and keep some level of Christmas spirit going as he slices, dices and decapitates Mr Scrooge’s crew with gusto. He must be handy in the Christmas kitchen with Mrs. Claus.

Norwegian director Tommy Wirkola of course has form in this kind of vaguely amusingly film, having made the demented Dead Snow. His first act is good, establishing the characters and their familial conflicts along with a sly sense of humour appropriate to these mostly horrible characters. The decline comes thick and fast in the remaining two acts though, proving that Violent Night is very much a one-joke film. As the unarmed Santa Claus has to fight for his survival and that of the Lightstone family, the violence accelerates from 10 to 100 on the thump-o-metre. While some of it is admittedly laugh-out-loud funny, it gradually becomes tedious to the point where the only reaction can be, as the song goes, ‘is that all there is?’. Well, other than saying that belief in Santa Claus is something worth fighting for. Or something. It’s just too muddled a film to function properly as a whole, convincing you to embrace it when the opposite is true. Krampus did something similar far more effectively a few years ago. A missed opportunity, Violent Night is more likely to be sitting in the Blu-Ray bargain bin this time next year rather than on the family shelf beside Die Hard. Bah, humbug indeed.