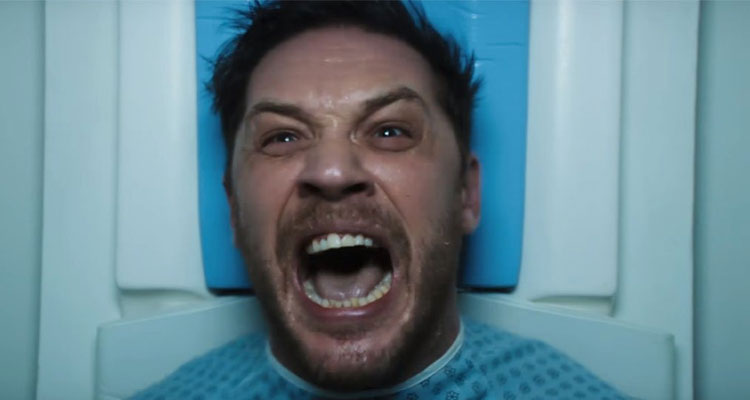 The Plot: Hack journalist Eddie (Tom Hardy) is always looking for the next scoop. After snooping on his lawyer girlfriend Anne’s (Michelle Williams) case, he takes a keen interest in Life Foundation – a scientific research organisation. It’s fronted by Carlton (Riz Ahmed), who is secretly experimenting on alien lifeforms known as symbiotes, which have been brought back from a comet. Life Foundation employee Dora (Jenny Slate) becomes concerned about the fusion between the symbiotes and humans, so she sneaks Eddie in for a peek. He gets more than he bargained for when he becomes infected by a vicious symbiote known as Venom. It takes him over, going on the rampage around San Francisco and is always hungry for human organs…

The Verdict: Anything that springs forth from Spider-Man 3 is already doomed. One of the most overloaded and disappointing of superhero films in recent memory, it introduced the toothy black mass of alien parasite Venom. Was it inevitable then that it would get its own spin-off film Venom? Not from the evidence of this messy new film. Lessons have not been learned since 2007, as Ruben Fleischer’s film falls very much into the same trap of not being able to pin down Venom and its oddball co-dependent relationship with Eddie. The most that 2018 can offer is a self-admission from Venom that it’s a loser on its home planet, just like Eddie. Right. Way to go Hollywood.

Since their new symbiotic relationship with Marvel, Sony have had some success with the hugely enjoyable Spider-Man: Homecoming. However, they and Fleischer appear to have fatally misjudged the right tone for Venom. There was potential here for an amusing odd couple relationship, as Eddie starts to enjoy the thrill and energy of Venom’s destructive powers. There was also potential for it be a supervillain film for a change. A film with a loopy plot like this needs to be gorier, more laid-back, more self-referential, more fun, more…. Deadpool-like. Instead, it’s a tonal mess from start to finish.

There’s little or no consistency in tone, which pinballs like from one scene to another in a feeble attempt to paper over the film’s many plotholes. For example, Venom lets slip to Eddie about a potential weakness which another character uses later on. How did that character know exactly what to do there, given that the information was edited by Eddie? By the end, it becomes a gooey mish-mash of bashing pixels and overblown action. The editing is quite choppy – presumably the result of the studio trying to make the best out of a bad film. Hardy has already stated that his favourite 40 minutes of the film were chopped out – ‘mad puppeteering scenes, dark comedy scenes’. Wait. There are 40 minutes of deleted scenes? What happened to this film in the edit room?

Hardy himself looks pained and frustrated throughout, like he knows he’s in a bad film but is contractually obliged to carry on regardless. Venom isn’t much fun, with one of the few genuine laughs coming courtesy of the customary Stan Lee cameo. A mid-credits scene is begging for a sequel, but it frankly doesn’t deserve it. There’s a line from the film that seems all too appropriate – ‘like a turd… in the wind’. Venom is a supervillain film that is superbad.