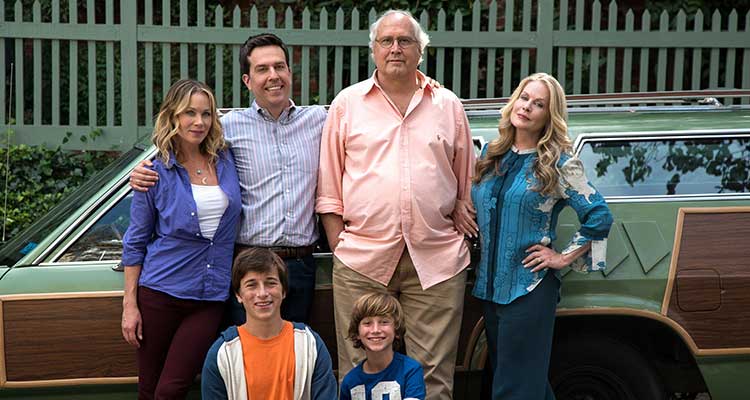 VACATION (USA/15A/99mins)
Directed by Jonathan M. Goldstein and John Francis Daley. Starring Ed Helms, Christina Applegate, Chris Hemsworth, Kaitlin Olson, Chevy Chase, Skyler Gisondo, Steele Stebbins
THE PLOT: Ed Helms stars as Rusty Griswold, a man whose only dream is to take his family on a nostalgic holiday to Walley Word, where he spent holidays as a kid. Of course, nothing goes right along the road, and it is not long before the dream holiday turns into a nightmare.
THE VERDICT: In case you didn’t see the original National Lampoon VACATION films, the first was released in 1983, and starred Chevy Chase as Clark Griswold – Rusty’s father. Written by John Hughes and directed by Harold Ramis, the film, and its sequels, focused on the Griswold family trying unsuccessfully to have an uneventful family holiday. This latest film serves as a reboot and a prequel to the original series of films.
Ed Helms and Christina Applegate are two actors with buckets of charm and precise comic timing, and this is certainly on display from both throughout the film. The story may not be a stretch for either actor, but it is clear that they had a lot of fun making this silly and over the top movie. Skyler Gisondo and Steele Stebbins play James and Kevin Griswold and there is a decent joke between the two, where the younger son bullies his older brother throughout the film. The rest of the cast comprises of cameos from some of film and TVs biggest stars at the moment, including Kaitlin Olson, Charlie Day, Chris Hemsworth, Ron Livingston, Regina Hall, Keegan-Michael Key, Leslie Mann and Nick Kroll. Of course, Chevy Chase and Beverly D’Angelo turn up too.
The story, written for the screen by Jonathan M. Goldstein and John Francis Daley, is reminiscent of the original 1983 film, as it focuses on a man desperate to create the perfect holiday for his family. The situations the family find themselves in are often ridiculous and over the top, but not always as funny as they should be. As well as this, since the family drift from one disaster to the next, the film often feels episodic, and lacks a cohesive feel. That said, there are nice nods to the original, with Rusty flirting with a woman in a red sports car – just as his father did in the original film – and an entertainingly self aware conversation among the family about how this vacation will stand part from the original.
As directors Jonathan M. Goldstein and John Francis Daley allow the family to bounce from one plot point to the next, but don’t always manage to draw the humour out of the situations they find themselves in. The film is well paced for the most part, but audience sympathy for these obstinate characters who seem only too delighted to make deliberate mistakes begins to wane toward the end of the film; perhaps there is one joke too many, or perhaps Chevy Chase’s small but hilarious role shows the rest of the film in a less favourable light.
In all, VACATION is light and silly, but lacks some of the charm and warmth of the original. There is enough to laugh at here to keep the audience engaged, but the over the top jokes and scenarios begin to wear thin by the final act of the film, and a lot of the jokes don’t land quite as well as they should. In 1983, this style of film felt fresh and new, but in 2015, it’s hard to shake the feeling that we’ve seen this all before.
RATING: 2.5/5
Review by Brogen Hayes