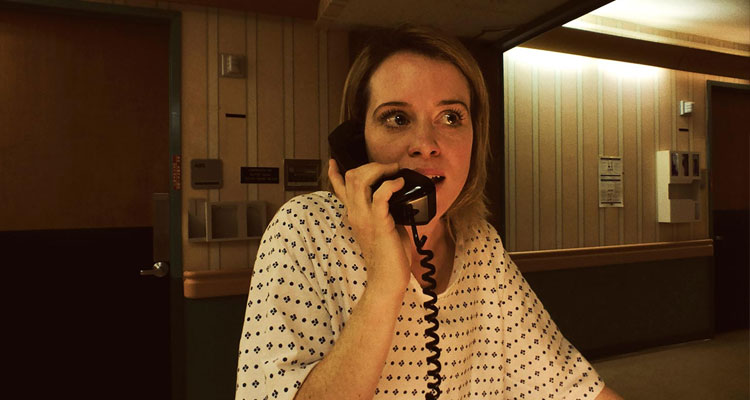 UNSANE (USA / 16 / 98 mins)
Directed by Steven Soderbergh. Starring Claire Foy, Joshua Leonard, Juno Temple, Amy Irving.
THE PLOT: Sawyer (Claire Foy) is a young woman who has moved to a new city to start a new life. All is not quite right with her though. She hooks up with a Tinder date and then rejects him. There’s a deep-rooted fear there stemming from what she believes is a stalker, David (Joshua Leonard), who is obsessed with her. While in therapy, she undergoes a psychiatric assessment. While she’s locked into her own mind, she also finds herself physically locked into a psychiatric institution. The doctors refuse to release her, believing that she’s a danger to herself and others. Her violent behaviour, lashing out at staff and other patients, plunges her deeper into trouble. Is it all a product of her mind or she is going… unsane?
THE VERDICT: After apparently retiring, Steven Soderbergh is back with a quick one-two of both ‘Logan Lucky’ and ‘Unsane’. It’s like he was never away, busily working away with that inventive mind of his. He’s always been an experimental filmmaker, so for ‘Unsane’ he’s followed in the footsteps of Sean Baker’s ‘Tangerine’ by shooting ‘Unsane’ in 4K on his iPhone. The democratisation of filmmaking is already there – it’s right in your hands. Shot in secret, using the iPhone allows Soderbergh to get up close and personal with his actors in enclosed spaces.
This is most evident in a scene involving Sawyer and a padded room – which would otherwise be difficult with a normal camera set-up. This being a psychological thriller about the mind, the intimate nature of the cinematography enhances the performances. Foy is outstanding here, her sharp-edged performance pushing her that bit more towards greater recognition. She deftly walks the thin line between sanity and insanity in Sawyer, so it’s not immediately clear as to which side she’s falling into.
The story by Jonathan Bernstein and James Greer is something of a favourite among filmmakers, even if it’s a familiar one. Drawing on classic films from Hollywood’s heyday like ‘The Snake Pit’, ‘Shock Corridor’ and ‘One Flew Over The Cuckoo’s Nest’, their script is layered with differing perspectives from stern authority figures and an unreliable main character. The script scores well in not tipping its hat too soon, keeping the audience on their toes.
However, it’s not as smart as it thinks it is. It lacks the sophistication in the writing of, say, the Oscar-winning ‘Get Out’. There are a few red herrings here and there, which underline the fact that it’s merely a good script elevated by better performances. Soderbergh is playing mind games with his audience, as much as he is with his characters. Still, there’s much to recommend about this film, especially if you like having your buttons pushed by a director.
RATING: 3 / 5
Review by Gareth O’Connor