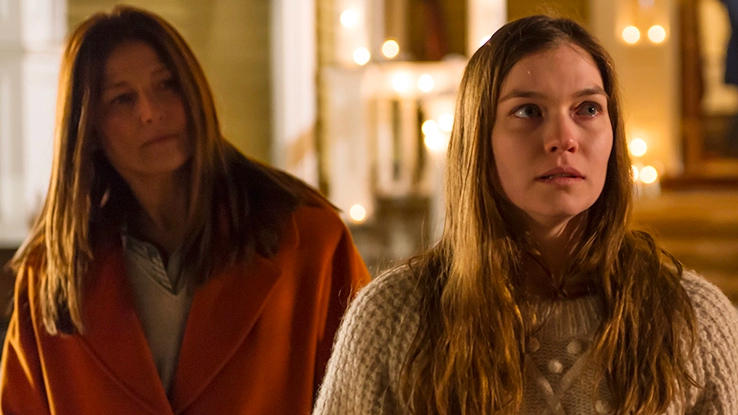 UNLESS (Canda / Ireland / 15A / 90 mins)
Directed by Alan Gilsenan. Starring Catherine Keener, Matt Craven, Hannah Gross, Chloe Rose, Abigail Winter.
THE PLOT: Writer and translator Reta (Catherine Keener) has reached a point in her life where she’s content. In a long-term relationship with Tom (Matt Craven), she also has three daughters – Norah (Hannah Gross), Christine (Chloe Rose) and Natalie (Abigail Winter). This peaceful family life is shattered when she discovers that her eldest, Norah, has left her boyfriend and apparently also her family to live on a Toronto street corner. Refusing to communicate with anyone, all she has to offer is a single word – goodness – that is written on a piece of cardboard. As time passes, Norah comes to terms with just what is happening and how it will affect this seemingly happy family…
THE VERDICT: Having worked on television documentaries in recent years, Irish director Alan Gilsenan returns to narrative fiction for the first time since 2004 with ‘Unless’. This Canadian-Irish co-production is a low-key, observational drama about the potential disintegration of a family unit. Adapted by Gilsenan from Carol Shield’s novel, it takes a long, hard look at how parents can fail their (adult) children and vice versa.
When a young woman with her whole life ahead of her abandons everything she knows for no apparent reason to live rough on the streets and in a women’s shelter, her family is incredulous. Is it a quarter-life crisis? Is she mentally ill? Is there some deeper purpose at her silent protest and request for people to engage with this concept known as goodness? The answer only really comes in the last few minutes. It goes some way to explain the events that have unfolded, but not in a fully satisfying manner.
While there’s an earnestness and sensitivity to what happened, it’s only done so in a fleeting manner. A bit more exposition here would have helped, just to get into Norah’s fragile mindset. That said though, there’s an affecting quality to the film thanks to the ever-excellent Keener and the pale, emotive Gross. With Norah being an adult, Reta can’t force her off the streets, so it becomes a story of gradual acceptance rather than rejection. Gilsenan packs some big themes into a short running time – about family, humanity and faith while keeping his characters in check. While it doesn’t fully live up to its ambitions, ‘Unless’ is still an interesting and resonant film.
RATING: 3 / 5
Review by Gareth O’Connor