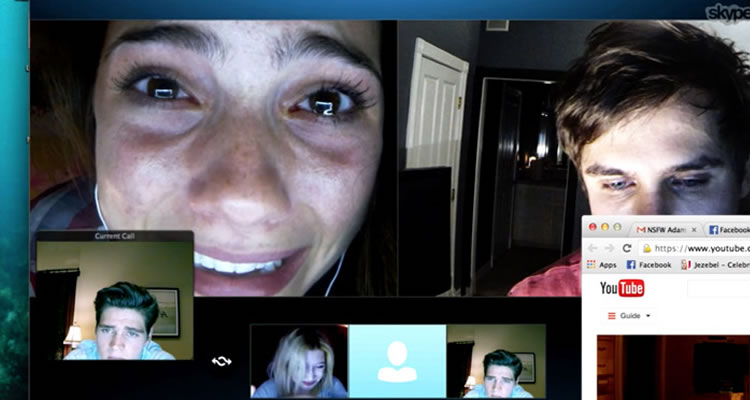 THE PLOT: As a group of teens are chatting online, they find themselves targeted by someone using their dead friend’s Facebook page. It soon becomes apparent, however, that this is not someone playing a prank on them, but a restless spirit bent on revenge.

THE VERDICT: Just when you thought it was safe to go back into the cinema, when you thought the found footage fad was dead and gone… Like the serial killer at the end of the slasher flick, it’s back and scarier than ever.

UNFRIENDED stars Heather Sossaman as Laura, Courtney Halverson as Val, Shelley Hennig as Blaire, Moses Storm as Mitch, Will Peltz as Adam, Renee Olstead as Jess and Jacob Wysocki as Ken. The cast do surprisingly well in their roles, since they spend most of their time seated and communicating through Skype, Facebook, Instagram or iMessage. The cast manage to convey the fears and frustrations of their teenage characters while hardly ever getting up from their desks, and although we only know what they reveal in conversation, we learn enough about them to root for them throughout the film.

Nelson Greaves’ script is told through the medium of the computer screen, specifically through Blaire’s computer as she goes through a terrifying evening online. Although this is her screen, we only ever see her on it – until the final seconds of the film – so we really never learn anything more than Blaire does. The audience is not in on the secret here, although we are generally faster to catch on to what’s happening, so we are in it with these characters. The banter between the characters feels real, like these are teens that you would encounter in real life, but the script starts to fall apart when they start vanishing from the story, as none of the other characters really seem to care once their friends have vanished off their computer screens.

Director Levan Gabriaze seems to know exactly who this film is for – 14-16 year olds – and aims directly at them, leaving little for those of us outside of that age range to relate to. The kids are recognisable, sure, but their decisions seem even sillier than the usual horror movie decisions. That said, the film is well paced, with the jumps and scares scattered throughout the film, and a sense of helplessness that builds throughout the film.

In all, UNFRIENDED is a film about teens, for teens. There are a couple of decent scares in there, but although the film tries to do something new with the found footage schtick, this is really nothing that we haven’t seen before. Even the scares aren’t that scary… And I’m a wuss.

Review by Brogen Hayes
2.5
Not that scary