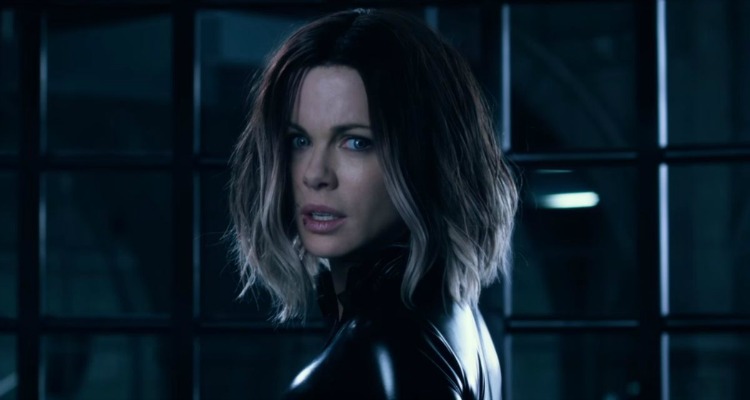 UNDERWORLD: BLOOD WARS (USA/16/91mins)
Directed by Anna Foerester. Starring Kate Beckinsale, Charles Dance, Theo James, Lara Pulver, Tobias Menzies
THE PLOT: The war between the vampires and the Lycans shows no signs of dying out, with both sides now searching for Selene’s (Kate Beckinsale) daughter Even, a vampire / Lycan hybrid. Selene has hidden Eve away for her own safety, and doesn’t even know where her daughter is, but this does not stop both sides coming for her and her allies.
THE VERDICT:

It is hard to believe that after five films and almost 14 years, the ‘Underworld’ film franchise is still going. Kate Beckinsale is back and doing her best Victoria Beckham impression as Selene the renegade vampire, and although steps were made in the previous film ‘Underworld: Awakening’ to diversify the story and bring in the rest of the world, this seems to have been abandoned in the muddled, dark and dank ‘Underworld: Blood Wars’.
Kate Beckinsale reprises her role as the outcast Selene, enemy of both the vampires and the Lycans, and has squeezed herself back into her pleather catsuit and corset in order to kick some bad guy ass. Lara Pulver hams it up in an assortment of ballgowns as Semira, a vampire with her own agenda, Charles Dance tries to bring some seriousness to proceedings as the head vampire Thomas, but is fighting a losing battle. Theo James plays David, Clementine Nicholson plays Lena and Daisy Head plays Alexia. None of the performances are particularly memorable or subtle, but they manage to fit the over the top and ridiculously heightened feel of the film.
Screenwriter Cory Goodman seems to have forgotten the laws of the ‘Underworld’ franchise, and the stories that have been told in the past films of the franchise. The film feels as though it is a much smaller story than the ones that have gone before, and although there are times when the film does feel as though it is telling a life and death story, since this is the fifth film in the franchise there is little time given to developing characters or allowing the audience to remember what has gone before.
As director Anna Foerster keeps ‘Underworld: Blood Wars’ dark, murky and, although it seems as though the story is drawn out and makes no sense, rattling along at a breakneck speed without ever trying to develop characters, fit with the film that has gone before or create a story that the audience can find something to root for. The action scenes are shrouded in darkness, and it is often difficult to tell who, among the dark haired black clad characters, is who. Add to this some dodgy CGI, vampiric wire fu and a distinct lack of fun, and ‘Underworld: Blood Wars’ goes from brainless but fun action film to dull darkness that lacks any kind of characterisation.
In all, ‘Underworld: Blood Wars’ is a small story told in a massive way, albeit dark, murky and dank. There is no time given to allow the audience to get to know these characters again, and since everyone is so vampiric and cold, no-one to truly root for. Still, those who enjoy a vampiric steampunkian pleather clad action film will have fun, everyone else should steer clear.
RATING: 1/5
Review by Brogen Hayes