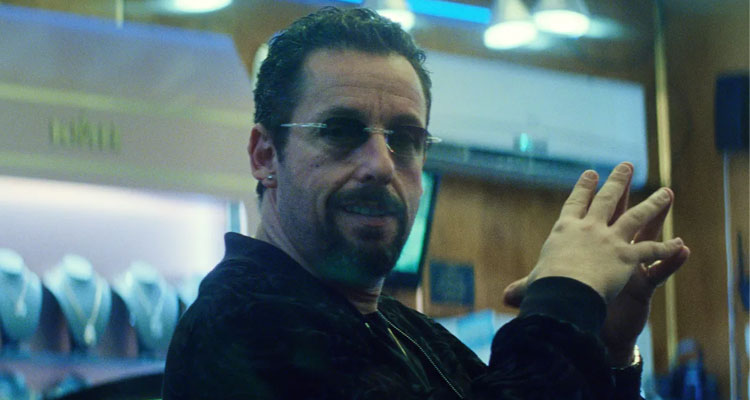 In short: A finely cut gem

The Plot: Howard (Adam Sandler) is a New York jeweller who likes to live dangerously. He’s bought an Ethiopian opal, which is rarely seen outside its native country. It’s a glittering multi-coloured gem which is rumoured to give good luck and reveals the universe inside. Through his buddy Demany (Lakeith Stanfield), he shows it to famed basketball player Kevin (Kevin Garnett) and agrees to loan it to him overnight. Kevin becomes obsessed with it though and doesn’t immediately return it. This piles immense pressure on Howard, who is due to put the opal up for auction a few days later. That’s not all though. His marriage to Dinah (Idina Menzel) is on the rocks, as is his volatile relationship with his employee and mistress Julia (Julia Fox). He also has aggressive rivals to contend with. Howard will have to walk a high wire to balance it all…

The Verdict: Brace yourself for Uncut Gems, the latest film from notable rising talents the Safdie Brothers, Benny and Josh. It’s an intense heart attack of a film which grips audiences like a vice early on and doesn’t let go until the spectacular closing shot. The New York-born filmmakers came to prominence in 2017 with Good Time, which gifted Robert Pattinson one of his best roles to date. However, Uncut Gems is something else entirely. It takes place over a hectic few days in the life of a streetwise Manhattan jeweller, who has to balance a whole load of spinning plates in the hope of landing a big cash win. All of this has to be done without any of them crashing down on top of him and cracking his massive ego. But that’s the way Howard likes it. Just when one problem rears its ugly head, he has to create two more to keep on top of his game. This is a man who doesn’t know when to stop – or even if he should stop.

The Safdie Brothers’ script, co-written with Ronald Bronstein, is inspired by their father’s time working for a jeweller named Howard in Manhattan’s Diamond District. There’s an authentic New York atmosphere to the proceedings, which extends to the casting of several wise guy faces who wouldn’t be out of place in a Martin Scorsese gangster film. Speaking of whom, Scorsese is an executive producer here and lends his extensive clout and filmmaking experience to power this confidently-made and very well-executed crime thriller. And confident it is, with the filmmakers structuring the story like a series of rabbit holes that go deeper and deeper for our lead character. As the pressure mounts on Howard, his family and his business, some steam will have to be released or his life will implode with potentially disastrous consequences.

Given the nature of the film it’s not exactly a relaxing evening at the cinema, but it’s an astonishing piece of filmmaking throughout. The Safdie Brothers have crafted the script into a finely cut gem and then made an equally impressive effort in turning that into an intense, wholly cinematic experience. It begins with a sweeping cinematic drone shot over an African mine that wouldn’t be out of place in a Bond film. This may be a Netflix-produced film, but it’s too good to be watched on the streaming platform alone. When viewed in the cinema, there’s no escape from Howard’s increasingly dangerous predicament. The viewer is locked into this wild ride through the seemingly controlled chaos of his life. With frequently overlapping dialogue, multiple supporting characters that flit in and out of the story and a punchy, oppressive electronic soundtrack by Daniel Lopatin that nearly drowns out dialogue, it’s as if the Safdie Brothers are daring the audience to keep up with them.

It’s a cinematic assault on the senses, but not one without its charms and a cheeky sense of humour too. A lot of that is down to the powerhouse performance by one Adam Sandler. When not trotting out his tiresome man-child shtick in juvenile nonsense, he can actually act his socks off. He did it before with Punch Drunk Love and Reign Over Me and he again pulls out the talented actor from deep within himself that we don’t see enough of. Even with those prior performances in mind, he’s a revelation here. He gets all the mannerisms and aggressive wheeling and dealing of the character down to a finely-engraved T, as Howard pushes himself towards the ultimate win. It’s a fascincating, bullish and Oscar-worthy performance. Not the showy look-at-me-Oscar kind, but one where the actor disappears into the character and comes out with acting gold as a result.

Uncut Gems is sure to be a talking-point film for both Sandler’s performance and the stylish, supremely confident direction from the Safdie Brothers. It’s modern filmmaking at its best, with no let up for the audience in turn with its lead character. You are in his sweaty shoes throughout. There’s a wonderful New York flavour to it too, which impresses even in its quieter moments like the family Passover gathering, all loaded glances speaking volumes. Programme it with fellow new release 1917 for a relentless double feature of excellent, immersive filmmaking.