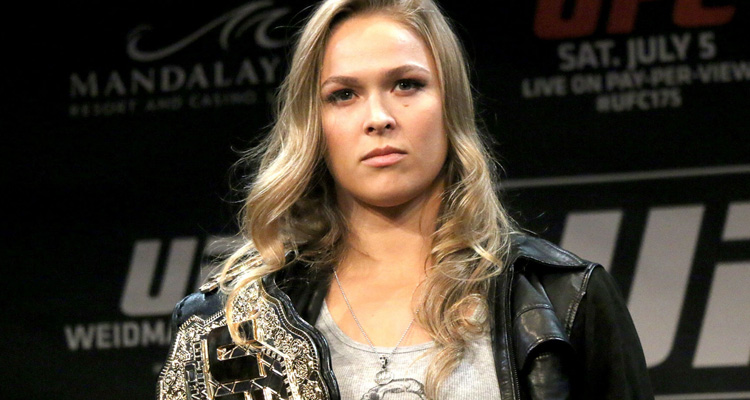 UFC Star Ronda Rousey To Play Herself in Biopic

Rousey, who knocked out her latest opponent, Bethe Correia, in just 34 seconds in a title bout, wrote the book with her sister Maria Burns Ortiz. You can check out the synopsis for the book below:

“Marked by her signature charm, barbed wit, and undeniable power, Rousey’s account of the toughest fights of her life—in and outside the Octagon—reveals the painful loss of her father when she was eight years old, the intensity of her judo training, her battles with love, her meteoric rise to fame, the secret behind her undefeated UFC record, and what it takes to become the toughest woman on Earth. Rousey shares hard-won lessons on how to be the best at what you do, including how to find fulfilment in the sacrifices, how to turn limitations into opportunities, and how to be the best on your worst day.”

In addition to starring, Variety has Rousey producing the film alongisde Mary Parent (‘Pacific Rim,’ ‘Godzilla’) with Mark Bomback (‘The Wolverine,’ ‘Dawn of the Planet of the Apes,’ ‘Live Free and Die Hard’) on board to adapt the book.

Rousey is no stranger to appearing on film, with credits that include ‘Fast and Furious 7,’ ‘The Expendables 3,’ and ‘Entourage.’ The badass will next be starring alongside ‘The Raid’ star Iko Uwais in the Peter Berg-directed action-thriller ‘Mile 22,’ which is set to shoot in January.