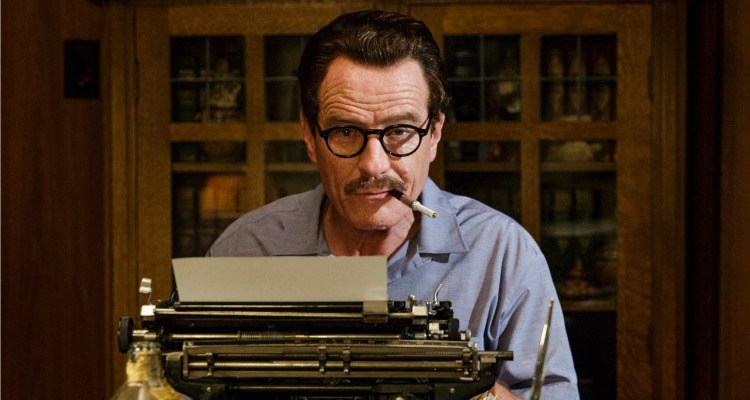 TRUMBO (USA/15A/124mins)
Directed by Jay Roach. Starring Bryan Cranston, Helen Mirren, Diane Lane, Elle Fanning, Louis CK, Alan Tudyk, Michael Stuhlbarg.
THE PLOT: In 1940s Hollywood, the Communist Party had fallen out of favour, with suspicions about members beginning to spring up. Screenwriter Dalton Trumbo (Bryan Cranston) was one of the Hollywood professionals forced to appear before the House Un-American Activities Committee when his support of Communism was revealed and, although he continued to write Oscar winning screenplays, he had to do it in secret for much of hi career since he was black listed due to his political affiliations.
THE VERDICT: There is no doubt that ‘Trumbo’ is an incredible story of people being forced out of their careers, bullied and tormented due to their political beliefs, but in trying to cram a story spanning decades into 124 minutes leaves the film feeling cluttered, slight and rather messy.
The cast of ‘Trumbo’ reads like a who’s who of the best working today, and it is they who carry the film. Bryan Cranston is on fantastic form as the obsessive, stubborn but kind hearted Trumbo, and he is joined by Helen Mirren as powerful columnist Hedda Hopper, who doesn’t think twice about naming names suspected of Communism and Dian Lane plays Trubo’s wife Cleo. The rest of the cast features Louis CK, Alan Tudyk, John Goodman, Michael Stuhlbarg, Adewale Akinnuoye-Agbaje, Elle Fanning, Dean O’Gorman and Roger Bart.
John McNamara’s screenplay is based on Bruce Cook’s book “Dalton Trumbo” but, as mentioned before, the screenplay simply tries to cram too much time and information into the film for it to feel smooth and coherent. The dialogue is top notch, but feels as though it is written to be quoted; that said, the screenplay is self aware of it’s flowery nature enough to have Arlen Hird (Louis CK) berate ‘Trumbo’ for the way he speaks. It is in trying to span the decades that the film struggles, not giving enough time to anything to make it feel concrete.
Director Jay Roach is another comedic director making his dramatic debut – after Adam McKay’s The Big Short – and from the careful timing of the characters speech, it is evident that this is an area where Roach’s strengths lie. The pacing of the film, however, struggles as so much information is covered, and although the performances are fantastic, these do not make up for a film that slows to a crawl and seems to lack a strong dramatic arc.
In all, ‘Trumbo’ has a fascinating story at its heart, and the cast are wonderful – particularly Cranston, CK and Goodman – but this is not enough to make up for a badly paced film that tries to cram decades of living into two hours. ‘Trumbo’ would have worked wonderfully as a six part Netflix special, and this would have allowed the story to have space to breathe.
RATING: 3/5
Review by Brogen Hayes