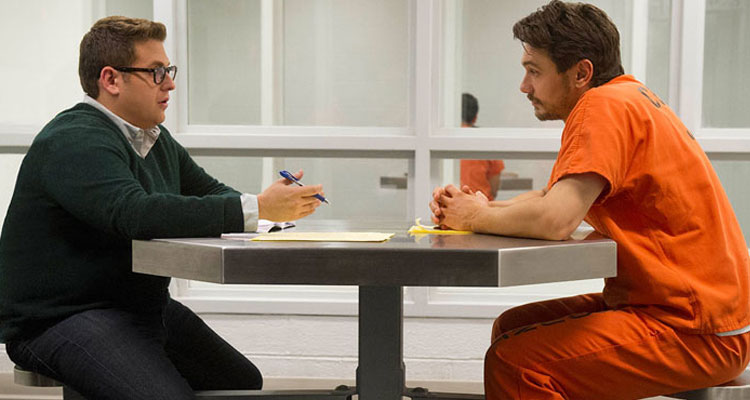 TRUE STORY (USA/15A/99mins)
Directed by Rupert Goold. Starring Jonah Hill, James Franco, Felicity Jones, Maria Dizzia, Ethan Suplee.
THE PLOT: When it is discovered that new York Times journalist Mike Finkel (Jonah Hill) made a composite character of five men he interviewed, for the sake of a better story, he is fired in disgrace. Not long afterwards, he gets a call from a local Oregon journalist telling him of Christian Longo (James Franco), a man who is accused of murdering his wife and family before going on the run using Finkel’s name. Intrigued, and hoping to find the story that will resurrect his career, Finkel contacts Longo in prison, and the two begin talking.
THE VERDICT: TRUE STORY is, as the title would have you believe, based on the true story of the strange relationship that sprung up between a man accused of murder and a disgraced journalist. It is interesting to see Jonah Hill and James Franco, comedy partners from This Is The End, team up on this project and manage to make the film an engaging enough drama.
Jonah Hill does fine as Michael Finkel; although he doesn’t always bring a huge level of depth to the character, it is his curiosity that drives the film, and he is able to carry the project on his shoulders. James Franco also does fine as Christian Longo; he has a great dead eyed stare, and is convincing enough to draw Finkel into his web of lies. Felicity Jones is criminally underused as Finkel’s partner Jill, although she has one great scene filled with fear and dread, and another one that is overly melodramatic and unnecessary. The rest of the cast is made up of ORANGE IS THE NEW BLACK’s Maria Dizzia and MY NAME IS EARL’s Ethan Suplee.
The story, adapted from Finkel’s book True Story; Murder, Memoir and Mea Culpa was brought to the screen by David Kajganich and Rupert Goold. The film plays rather like a cinematic version of Serial – or at least something Sarah Koenig would have investigated incredibly well – with the audience drawn in through some well placed tension and the ebb and flow of belief between the two men. There are times where it seems that each is manipulating the other, and this is where the tension for the film comes from, but the trouble is, it is obvious that one of the men is a master at this game, and the other is just learning the ropes.
As director, Rupert Goold makes his debut feature engrossing and interesting. We are never told more than what Finkel sees, but it is obvious that Finkel actually believes the lies so obviously being spun; this, combined with the obvious similarities between the men – and the obvious differences – is where the drama and thrill of the film comes from, although with some stronger central performances the cat and mouse game would have been a lot stronger and more thrilling. It’s not that Franco and Hill are weak per se, they just seem disengaged for a lot of the film.
In all, TRUE STORY has a thrilling tale at its heart; director Rupert Goold proves that he is one to watch out for. Lacklustre performances from Jonah Hill and James Franco, however, push TRUE STORY down from a thrilling game of cat and mouse to an often engaging tale of rat and mouse.
RATING: 3.5/5
Review by Brogen Hayes