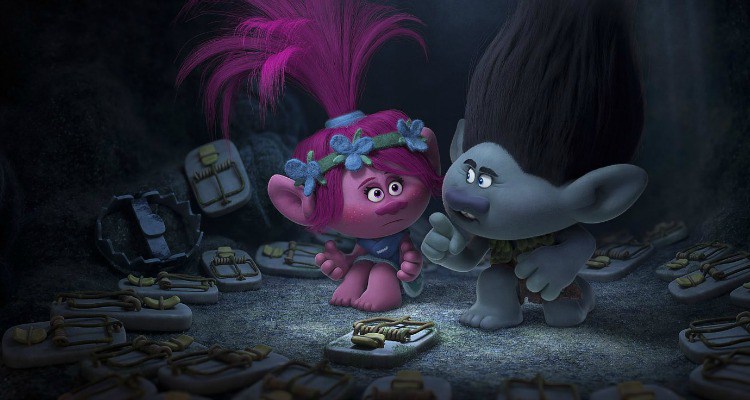 TROLLS (USA/G/92mins)
Directed by Mike Mitchell and Walt Dohrn. Starring Anna Kendrick, Justin Timberlake, Zooey Deschanel, James Corden, Jeffrey Tambor
THE PLOT: 20 years after King Peppy (Jeffrey Tambor) led the Trolls to safety from the miserable Bergens – who can only feel happiness when they eat a Troll – his daughter Princess Poppy (Anna Kendrick) throws a huge party to celebrate the milestone. The trouble is that the party is too loud and too crazy, and the Bergens finally get wind of where the Trolls have been hiding. When several Trolls are taken, Princess Poppy and the grumpy Troll Branch (Justin Timberlake) set out to save their friends, danger or no danger.
THE VERDICT: ‘Trolls’ is inspired by the dolls first created in 1958 by Thomas Dam, which have had crazes of popularity around the world ever since. Although the dolls themselves verge on ugly cute, the Trolls in this new film are definitely closer to cute, while the Bergens have a kind of ugly charm about them.
Anna Kendrick and Justin Timberlake lead the cast of ‘Trolls’, and do well with what they are given. Kendrick makes Poppy almost painfully happy, and Timberlake’s more cynical, sarcastic troll is the perfect way to balance her out. Elsewhere, Christine Baranski takes on the role of the evil Bergen chef and does well with the character, bringing her own sense of character to the role, and Christopher Mintz-Plasse makes Bergen King Gristle a rounded but somehow likeable character. The rest of the cast features Zooey Deschanel, Gwen Stefani, Jeffrey Tambor, Hames Corden, John Cleese, Quvenzhané Wallis and Russell Brand.
Jonathan Aibel and Glenn Berger’s screenplay pits happiness against misery in thisbrightly coloured adventure tale, and somehow gives off the message that Trolls are anti-depressants for Bergens… Which is slightly strange for the adults in the audience. As well as this, the constant search for happiness in the film is a little troublesome since life is not just about the good times, but the bad times too, but this is just about resolved with some clever dialogue in the final act. There are times when the story wanders off on tangents, with the Trolls working with a Bergen in her quest for love, which definitely feels as though it is more of a distraction than integral to the plot.
As directors Mike Mitchell and Walt Dohrn make ‘Trolls’ brightly coloured and slightly manic for the first half, but the chirpy likeable characters, strong voice work and beautiful animation – which makes everything look as though it is felted or slightly fuzzy – keep the audience intrigued. It is when the Trolls get to Bergen Town that the pacing of the film falters, going off on a tangent that eventually ties into the main plot, but feels like a distraction. The songs are well placed though, and as well as old favourites like Clint Eastwood by Gorillaz, True Colours by Cyndi Lauper and D.A.N.C.E by Justice, there are original songs by Kendrick and Timberlake that add to the peppy tone of the film. There are some laughs to be had in the film, although these mainly come from peripheral characters, but the adventure side of the film – apart from a lag in the middle – certainly delivers.
In all, ‘Trolls’ has a slightly troubling message as the characters search for constant happiness but the look and feel of the film are lovely, the characters well drawn out and the music is a lot of fun. It’s just a shame that the slump in the middle of the film makes it very much feel like a film of two disparate halves.
RATING: 3.5/5
Review by Brogen Hayes