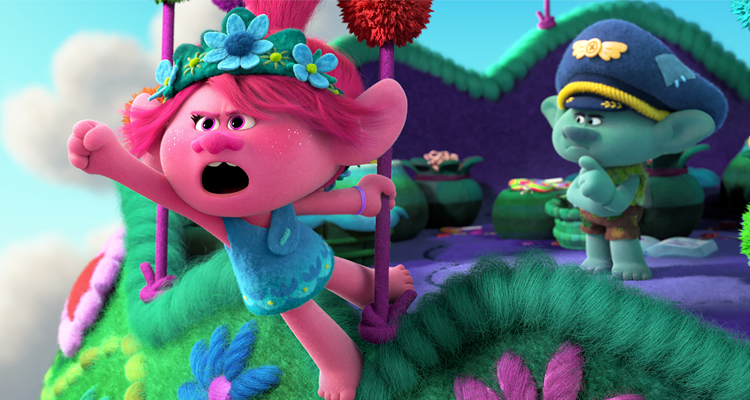 In short: Rocks and rolls

The Plot: The ever-cheerful Queen Poppy of Pop Music (Anna Kendrick) has now settled into a friendship with best bud Branch (Justin Timberlake). Though, he’s not too keen on being friendzoned. A dark cloud threatens to rain on their candy-coloured world. Queen Barb of Rock Music (Rachel Bloom) wants to unite the disparate tribes of trolls under one banner – it’s rock music or die. She’ll need to collect the other five musical strings of this world – pop, country, funk, techno and classical… and then play a powerful chord that will change their world forever. Not if Poppy has anything to say about it. She sets out with Branch and Biggie (James Corden) to stop Barb from world domination…

The Verdict: The film landscape is changing with the unusual times we live in. With cinemas closed for the moment, streaming platforms have found their moment in the limelight. Hollywood has taken note, hastily pulling and then re-arranging their big tentpole films for later in the year or next year. Not all of them though. Universal Pictures was the first to adapt to the challenging environment, breaking the theatrical release window by quickly putting just-released films like The Invisible Man on demand. And then there’s Trolls World Tour, an animated sequel which is bypassing cinemas altogether and is now available on various platforms including Sky Store and Amazon Prime. It’s not the first intended theatrical film to be re-directed to digital platforms… but it could be a sign of things to come.

Trolls World Tour lends itself to the theatrical experience, being an explosion of colour, music and fun for all the family. However, it also works on a cosy sofa and the small screen where you can rock along to the beat of this upbeat sequel. Films like this often have a theatrical afterlife on home entertainment anyway. The premise of this sequel is all about such modern themes as diversity, acceptance and respect for others who are different – a message for children that grates slightly but doesn’t come across as patronising. Based on the Good Luck Trolls line of toys, co-directors Matt Dohrn and David P. Smith are intent on having as much as fun as possible with their disparate characters, environments and wildly varying tastes in music. One troll’s dream music is another troll’s fingernails on a blackboard. That kind of thing. Rock must rule supreme – or else.

It’s a battle of the troll bands, so to speak. The glass full of sunshine that is Poppy versus the in-your-face doom of Barb. Poppy isn’t immune to wanting to subject her pop music to other tribes of trolls though. There’s a subtle theme running through that Poppy and Barb are quite alike, which is surprisingly deep for a film aimed at a family audience. Dohrn and Smith don’t nearly make enough of this or of Barb herself. She’s a one-chord character at best. Voiced with rock star enthusiasm by Rachel Bloom, Barb strangely disappears for a noticeable chunk of the film. A missed opportunity there to flesh her out into the rock queen that she deserves. However, the animation makes up for it. It’s quite eye-popping at times – a 3D enhancement might have been worthwhile for home viewing.

It’s not exactly original thinking, but Trolls World Tour rocks and rolls through its multi-coloured worlds with a riot of visual flair and musical showstoppers. It should keep cabin-feverish kids entertained as they munch on their Easter eggs.

TROLLS WORLD TOUR is available to watch ON DEMAND for Irish audiences now!