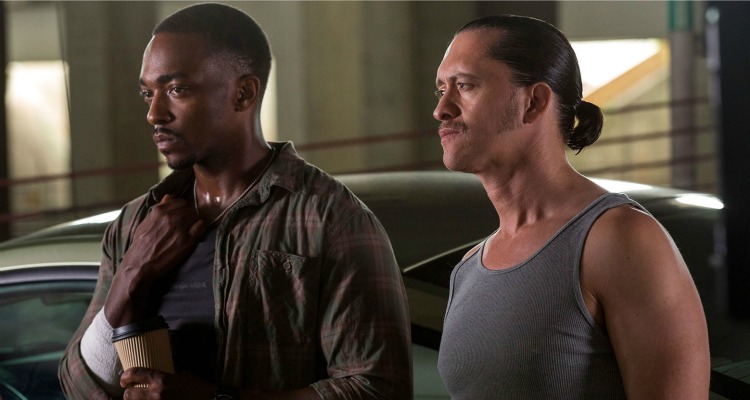 TRIPLE 9 (USA/16/115mins)
Directed by John Hillcoat. Starring Casey Affleck, Anthony Mackie, Tersa Palmer, Woody Harrelson, Kate Winslet, Chiwetel Ejiofor.
THE PLOT: After pulling off a bank heist for the Russian mafia, crooks Russell (Norman Reedus), Gabe (Aaron Paul) and corrupt cops Michael (Chiwetel Ejiofor), Marcus (Anthony Mackie) and Rodriguez (Clifton Collins Jr.) are forced to do one more job for Irina (Kate Winslet), in order to pay off their debt to her. The trouble is that new cop Chris (Casey Affleck) has his suspicions, and this new job will take longer to pull off, so the crew decide to buy themselves some time by staging a Triple Nine – killing a police officer.
THE VERDICT: ‘Triple 9’ is a change of pace of Lawless and The Road director John Hillcoat, as he takes on a police thriller that focuses on corrupt police officers using their power to break the law.
The ensemble cast, for the most part, are strong in their roles; it is really the story of Casey Affleck’s Chris and Chiwetel Ejiofor as Michael, and these are the performances that stand out. As well as these, Anthony Mackie is strong as Marcus, the cop who is partnered with Chris all of a sudden, and Woody Harrelson obviously has a lot of fun playing the eccentric investigating officer. Elsewhere, Kate Winslet, Aaron Paul and Norman Reedus have less to do. Winslet’s accent is a little all over the place, but Paul and Reedus do well with the little they are given.
Matt Cook’s screenplay feels familiar in that it can be easily compared to ‘Heat’ and any other police thriller you could care to mention… ‘Training Day’ perhaps!? The difference in the story occurs through the relationships in the film; the entire undercurrent of the film is of family as many of the characters struggle to hold on to what they have got and the people they love. The twists, such as they are, are not too shocking or even twisty, and there is a point in the middle when it is unclear who the audience should be rooting for to make it out of this tangle of right and wrong. As director, John Hillcoat obviously enjoyed himself in making this cop thriller, but there is so much story to fit into the 115 minute running time that the film feels as though it is dragging its heels for the first hour. The set pieces are slick and well made; the film comes into its own once the relationships come into play and John Hillcoat once again shows off his talent at making criminals and anti-heroes the ones the audience roots for, but also making sure that not many of them make it out of the film intact.
In all,’ Triple 9′ is a departure for director John Hillcoat, and there is a lot of fun to be had with this tangled police thriller, but there are times when the story becomes muddled, actors are underused and some accents are a little too chewy to forgive.
RATING: 3.5/5
Review by Brogen Hayes