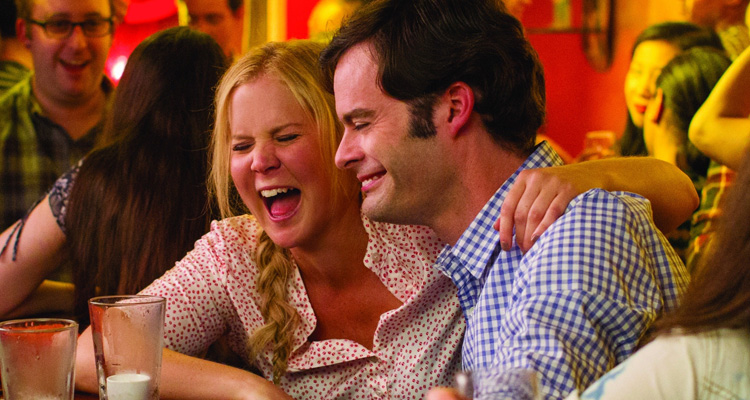 TRAINWRECK (USA/16/125mins)
Directed by Judd Apatow. Starring Amy Schumer, Bill Hader, Tilda Swinton Brie Larson, LeBron James, Ezra Miller.
THE PLOT: Amy (Amy Schumer) is a woman in her 30s with a successful career as a magazine writer. Although her professional life may be on point, her personal life is less so, with her having a string of one night stands – without the knowledge of her boyfriend – and her father being moved to a care home. When Amy meets the charming and sweet Aaron (Bill Hader), and the two start dating, she has to overcome her fear of commitment, and fast.
THE VERDICT: Although American audiences have been aware of the brilliant Amy Schumer for some time, at this side of the world, her success and arrival into the spotlight feels sudden, and delightfully welcome. Not only is Schumer wonderfully funny, but with her script for TRAINWRECK, she proves that she is a talent to keep an eye on.
Schumer plays a character who audiences who know her TV show – ‘Inside Amy Schumer’ – will find slightly familiar. Self assured yet insecure, successful professionally but a mess personally, Schumer makes the character feel like a woman we either are, or we know, and her trademark frankness is on full display here. Bill Hader is sweet and charming – yes ever so slightly misogynistic – as Aaron Connor, and his scenes with LeBron James are hilarious and light. Brie Larson is a great foil for Schumer; her character Kim has her life together in a way that feels alien to Amy and each throw the other into stark relief. Tilda Swinton is perhaps the most surprising in the film; almost unrecognisable under long blonde hair and false tan, Swinton is brash, loud and crass, and utterly brilliant in her laugh out loud turn as Amy’s editor Dianna. The rest of the cast is made up of Ezra Miller, Dave Atell, Inside Amy Schumer regulars Jon Glaser and Bridget Everett. The film also features cameos from Daniel Radcliffe, Marisa Tomei, Matthew Broderick and several sports stars.
Schumer’s screenplay feels honest in its comedy, and there are several heartfelt emotional scenes that bring balance and a sense of reality to the film. There are some brilliant lines throughout, Swinton’s line ‘I’m sick of your ginger nonsense’ is a particular standout, but there is plenty to laugh at in this precisely observed and timed film. As well as this, the storyline concerning Kim and Amy’s father is not only inspired by Schumer’s real life, but it is carefully played, adding a layer of depth to each of the characters. The final resolution, however, feels slightly formulaic – even though it is still damn funny – and there is the feeling that Amy has to change everything about herself to make a relationship work, although it could be argued that it was implied throughout the film that this was a choice that the character wanted to make.
Director Judd Apatow somehow manages to make the film with a light touch, with little of the tropes and obvious humour that we have come to expect from him. As always though, the film is far too long, with the final act not only dragging its heels, but feeling slightly disconnected from the rest of the film.
In all, TRAINWRECK is a precisely observed comedy with well-placed moments of honest and subtle drama. Schumer and Hader are great together, with Schumer easily carrying the film on her smart and witty shoulders. Swinton is a comedic revelation and, although the film ends up in a familiar place, the journey there is a funny, sweet and worthwhile one.
RATING: 4/5
Review by Brogen Hayes