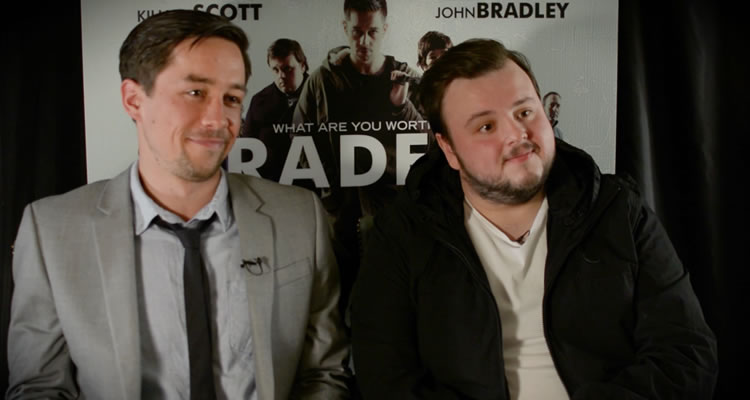 Rachael Moriarty and Peter Murphy’s TRADERS has been steadily building up a critical fanbase at festivals, a kind of ‘Fight Club’ For Schlubs, it takes the simple premise of highly economically-stressed individuals willing to secretly enter into winner-takes-all one-on-one fights to the death. Having recently been let go from their high-paying jobs, three ex-co-workers quickly become two after a swift econicide drive straight into a tree, laving Harry Fox (Killian Scott) and Vernon Stynes (John Bradley) more than a little shaken. And desperate. For numbers whizz Vernon, one of his new money-making schemes piques the increasingly desperate Harry’s ear – an online site, ‘Traders’, where you anonymously stake money for a low-budget gladiator battle in a remote spot. Once you’ve both dug the grave first, of course. We met up with lead actors Killian and John recently, both making the move onto the big screen having found fame on TV’s ‘Love/Hate’ and ‘Game Of Thrones’ respectively.

WATCH THE TRAILER FOR TRADERS