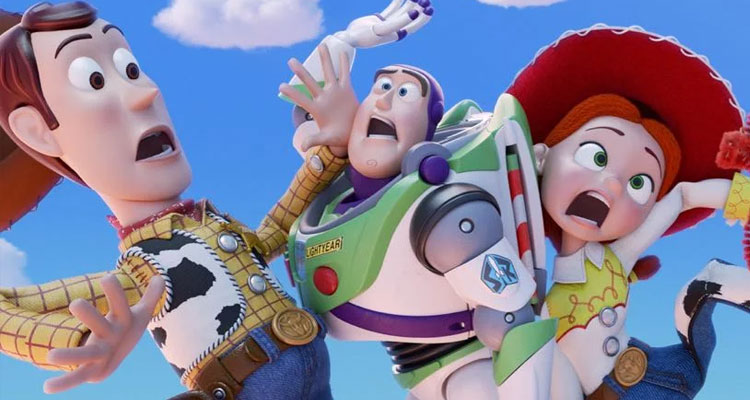 In short: A second goodbye

The Plot: Time is moving on for Woody (Tom Allen), Buzz (Time Allen) and the other toys. Andy has grown up and gone to university. His toys have been passed to his younger sister Bonnie, who doesn’t show as much interest in Woody. On her first day in school, Bonnie literally makes a new friend – a spork with a love of trash whom she dubs Forky (Tony Hale). Forky becomes her new favourite toy, a way for her to connect to the strange new world of school. When Forky wanders off on a family trip to a fairground, he’s taken in by retro doll Gabby (Christina Hendricks) who has long since been left on the shelf. Woody, Buzz and the others set out to bring the loopy new toy back home where he belongs…

The Verdict: The toys are back in town. Unexpectedly perhaps. Nine years ago, Toy Story 3 made even grown men weep with its touching farewell to Pixar’s most loved animated characters. The ones that made us all fall in love with Pixar and their unique brand of animation in the first place. So, it’s with some trepidation that audiences will approach Toy Story 4, an all-new adventure which sees our favourite characters going on another frenetic adventure and introduces a few new ones too. The real question of course is whether this latest – and very likely last – instalment justifies its existence. The answer is a reasonably solid yes. Not resoundingly perhaps but even the most cynical Pixar fan, weary of them churning out yet more unloved Cars sequels, will not be unmoved by this third sequel.

There’s a lovely sense of time passing here, that the toys don’t age but their owners do. Children grow up and put away childish things, but there’s always another child just waiting around the corner to pick up Woody and play with him. That’s the main sentiment behind the script, by Andrew Stanton and Stephany Folsom. Woody progresses further in his journey as a toy here, as he comes to realise that the march of time is relentless. Sometimes toys just need to pass into different hands and go to different places, as part of their own journey. Not without having some fun along the way of course. That’s where the new characters come in and they inject liveliness and colour into the proceedings.

The googly-eyed and wander-prone Forky is a welcome addition to the gang of toys. 1950s doll Gabby enters in an antique store, where she has footsoldiers in the guise of sinister dummies not unlike Slappy from Goosebumps. Listen out for the first of several Stanley Kubrick references here – an always welcome touch from the movie-loving Pixar crew. However, it’s Duke Caboom who steals the show. Essentially a Canadian take on Evil Knievel and his 1970s pull toy, Duke Caboom is an arch poseur who is totally confident in his stunt abilities (well, almost). Who better than Keanu Reeves to voice him, lending him that requisite ‘whoa’ quality right through to the most excellent gags that are interlaced with the first batch of end credits.

The introduction of these new characters does shift the focus more onto them, meaning that some of the supporting players are somewhat sidelined. More of the world-weary Mr Pricklepants and even the yee-haw Jessie would have been welcome. There’s still much to enjoy here though, building to a conclusion that is earned. The film itself is akin to Indiana Jones And The Kingdom Of The Crystal Skull – a fourth film in a supposed trilogy that is pleasant and enjoyable enough, justifies its existence but doesn’t do much more than that. Sometimes a second goodbye is required and that’s fine for Pixar. Hanging out with these characters for another 100 minutes is still a joy for all, for the little kids of today and the big kids who first discovered them way back in 1995. With Pixar now focusing on creating original content rather than sequels to existing properties, they are surely going to infinity and beyond.