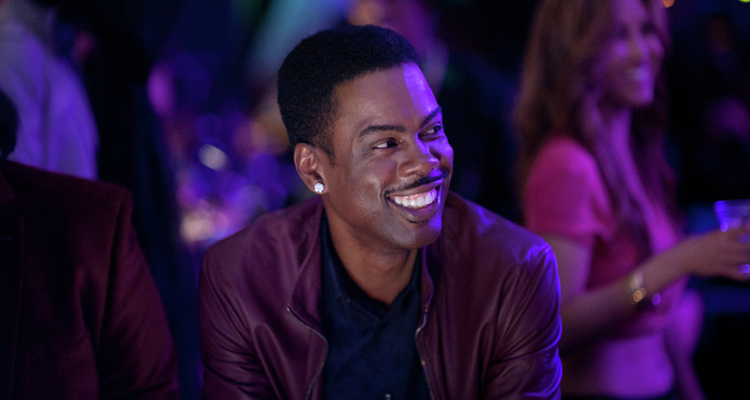 TOP FIVE (USA/16/102mins)
Directed by Chris Rock. Starring Chris Rock, Rosario Dawson, Kevin Hart, Tracey Morgan, Gabrielle Union.
THE PLOT: Comedian Andre Allen (Chris Rock) is struggling with the transition to serious movie star, and his upcoming reality show wedding. When journalist Chelsea Brown (Rosario Dawson) spends a day with him to write an article about him, Allen finds himself realising some truths about himself and the world he has constructed for himself.
THE VERDICT: It feels like a long time since we have had a Chris Rock movie – in reality it has only been two years since GROWN UPS 2 – so for the actor to return as writer, director and star of TOP FIVE feels like a full on assault on audiences, but the good news is that TOP FIVE is sweet, funny and warm.
Rock does well as the lead actor here, perhaps playing a version of himself to an extent. Rock is funny and honest, and his chemistry with Rosario Dawson is a joy to watch on screen. Dawson’s performance is unshowey and again, feels honest and warm. The supporting cast is full of recognisable faces, including Tracey Morgan, Kevin Hart, Whoopi Goldberg, Adam Sandler, Jerry Sienfeld, JB Smoove, Gabrielle Union and Cedric the Entertainer. Most of these performances are small comic roles, but they work well and bring a sense of community and warmth to the film.
Chris Rock’s screenplay focuses on the conversations between Andre and Chelsea, and although the two start of frosty, this soon gives way to honest conversation between the two. The story is rather simple, and perhaps a little familiar, but the dialogue is what keeps the film moving. There are times, however, when it feels as though there is almost too much crammed in to one day, but this is obviously done for the sake of storytelling, and for the characters to evolve on screen, and can be forgiven.
As director, Rock seems to have taken a leaf out of Richard Linklater’s book, giving TOP FIVE a BEFORE SUNRISE sort of vibe. This is a welcome change to many of the romantic comedies of late. It also gives the film a chance to celebrate New York City for all it’s idiosyncrasies. There are times when the pacing struggles, but the film recovers from these just in time for TOP FIVE to have a rather convenient but heart warming ending.
In all, TOP FIVE is a surprisingly honest and sweet film about two people getting to know one another. Some of the plot is a little familiar, the pacing suffers from time to time, and the film is not quite as funny as it thinks it is, but TOP FIVE is a delightful surprise and return to form for Chris Rock.
RATING: 4/5
Review by Brogen Hayes