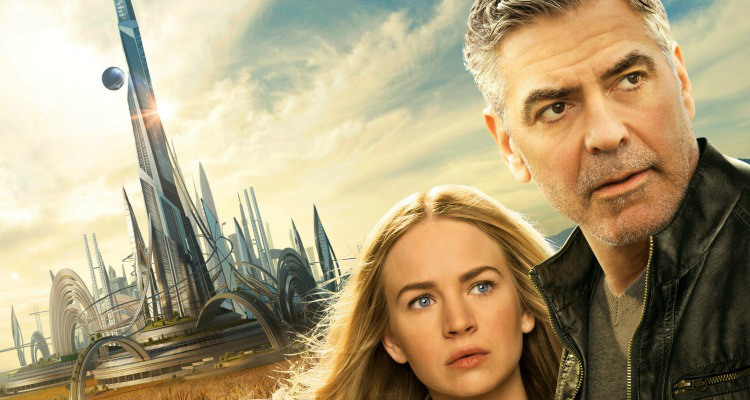 TOMORROWLAND (USA/PG/130mins)
Directed by Brad Bird. Starring George Clooney, Britt Robertson, Hugh Laurie, Thomas Robinson, Raffey Cassidy, Kathryn Hahn, Pierce Gagnon, Judy Greer.
THE PLOT: The adult Frank Walker (Clooney) seems to have lost his faith in tomorrow. That was yesterday, when the future “was different; the future was brighter”; today, Frank has gone full Boo Radley, hiding away inside his isolated, fortified, hi-tech house.
The young Frank Walker (Robinson) was obsessed with learning to fly. Or, given that his primetime childhood was the 1960s, learning to jet pack, thanks largely to his mum’s old Electrolux vacuum cleaner. Bringing his invention along to the 1964 New York World Fair, the young Frank sees his not-quite-finished jet pack dismissed by grumpy if curious judge Nix (Laurie), but admired deeply by the young Athena (Cassidy). So much so, she sneaks Frank in behind the curtain, to where the shiny, happy, slick Tomorrowland is being built.
Cut to 45 years later, and that same childlike wonder is clearly in Texan teenager Casey Newton (Robertson), a stargazing daydreamer who will stop at nothing – including sabotage – to keep the nearby NASA rocket launch site from being demolished. Her undeniable passion for a space-age future brings her to the attention of Athena – who hasn’t aged a day, and who reckons this might just finally be the one to spark Frank Walker back to believing in the future and thus help save Tomorrowland from becoming a Scientology wet dream.
THE VERDICT: Akin to Christopher Nolan’s INTERSTELLAR, Tomorrowland sees Brad Bird embracing his beloved retro-future for yet another rollicking rocket ride (following 1999’s THE IRON GIANT and 2004’s even more towering, perfect, poptastic Pixar pic, THE INCREDIBLES) – and again, he makes us believe in that there might just be a satellite of love out there.
You know it’s a big deal when you get to feck with a major studio’s logo, but then again, this is Disney now celebrating Disney then, a synergy motherload that, if they’re lucky, will hit like PIRATES OF THE CARRIBBEAN. If they’re unlucky, it’ll miss like The Haunted Mansion, another Disney theme park favourite that got the big-screen, big-star treatment.
TOMORROWLANS will probably land somewhere between the two, being a little too cerebral for full-on fan fever, but sweet enough to benefit from solid word-of-mouth. Beyond Bird’s typically tantalising direction, and a nifty script that manages to pull all the space-time continuum craziness together, this is a well-cast film. Clooney, as expected, does a damn fine Clooney, the Robinson boy is spot on as Clooney’s Mini-Me, Cassidy is A113 as the bastard child of Mary Poppins and BLADE RUNNER’s Rachael, whilst as the teenage Casey, Britt Robertson has all the quiet energy and wry grit of a slightly younger Jennifer Lawrence.
And if all that doesn’t grab you, near the end, you do get to see one of Hollywood’s most famous humanitarians throw a young girl to her very splattery death. Nice.
RATING: 4/5
Review by Paul Byrne