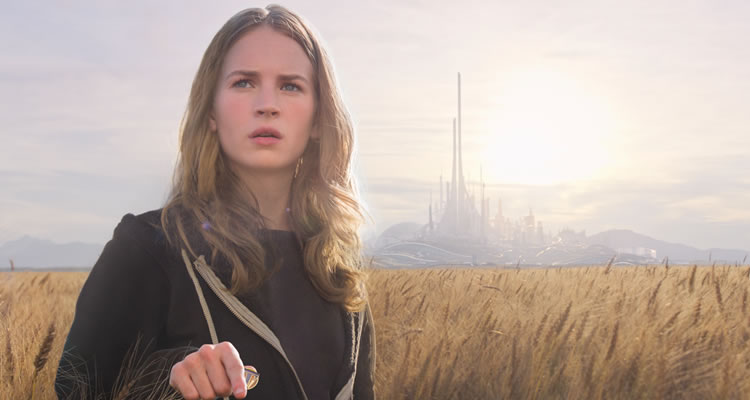 TOMORROWLAND – Behind The Scenes with Damon Lindelof

Writer Damon Lindelof first came to our attention as a show runner on ‘LOST’, his unique style baffled us and kept us tuning in week after week, he went on to write for JJ Abrams ‘Star Trek’ and Ridley Scott’s ‘Prometheus’. This month he joins Brad Bird for Disney’s TOMORROWLAND, check out his behind the scenes Q+A below.

A:         I was having lunch with Sean Bailey, president of motion picture production for Disney, and we were talking about the “Pirates of the Caribbean” movies. It was an opportunity to take something that is familiar to people and make something original out of it. So Pirates of the Caribbean has existed as a ride forever, but Captain Jack Sparrow didn’t exist until the movies came along. Sean was saying that it had been challenging to do that for other things in the, theme parks and was there anything that I thought was an interesting opportunity for a movie. I told him that if there was a movie called “Tomorrowland,” I would go and see it. I told him I have no idea what that movie’s about, but it’s a pretty exciting idea to me. Sean asked me what the word Tomorrowland means to me and my answer to that question was the beginning of this movie.

A:         There were a couple of different things. The first was that I was really interested in this idea of what the future was in the mid-1960s. I guess the idea started and went all the way through the twentieth century, but particularly in the ‘50s and ‘60s, during the Space Race era, we thought about the future in this very optimistic way. But something had shifted in my generation, born in the ‘70s, and certainly all the generations that followed, where the future is something that we look at as post-apocalyptic. There’s going to be a war; the robots are going to take over; there’s going to be zombies or global warming is going to create tidal waves and all these things. I was sort of like, “What happened?” I’d really like to recapture that idea of optimism, of a future that we have to look forward to.

When I started discussing those broad ideas with Sean Bailey, he said there was a box he wanted me to see. It had been discovered accidentally in the Disney archives. It had all this weird stuff in it that related to the inception of the Tomorrowland part of Disneyland and the 1964 World’s Fair, which Walt Disney was heavily involved in. The box contained all sorts of fascinating models and blueprints, photographs and letters. I began to imagine that they were a guide to a secret story that nobody knew but what would that story be? It felt to me that the most obvious answer was, “What if there really was a place called Tomorrowland that was not built in a theme park, but existed out there somewhere in the real world?” That became the jumping-off point for the story.

Q:        So now, how did your writing team grow? Jeff Jensen came into the program, correct?

A:         Jeff and I met when I was doing “Lost,” and he has this amazingly imaginative, creative brain. As a journalist working for “Entertainment Weekly,” he would watch “Lost” every week and come up with these crazy theories that were so inventive that I often found myself wishing that I had been smart enough to make the show about what Jeff thought the show was about. He was exactly the guy I needed to go through this box and help us with a historical journalistic analysis of what each item is, but then help me start to kind of cook what might be a cool, fictional story that connects all these items in the box.

So, I brought him in and then we ended up writing a detailed story draft and got Brad Bird involved.

A:         The idea is that near the turn of the twentieth century, just as the Industrial Revolution was really underway, the greatest thinkers in the world at that time, embodied by Edison, Tesla, Jules Verne and Eiffel, all got together in Paris at the 1889 World’s Fair and hatched a plan to build a city of the future. But the catch was that it couldn’t be controlled by a particular country or government because whatever they developed in this city could be used for nefarious gain and they didn’t want to have any corporate interests involved. It wasn’t about making money. They would build the world’s greatest ongoing Utopia and science fair. The secret group, called Plus Ultra, hatched that idea, but it took them a very long time to realize it. Over the course of the twentieth century, there were two World Wars that set them back, but these guys developed the technologies that we have today but much sooner. They had cell phones in the 1930s and space travel twenty years before that. They had advanced rocketry almost a full sixty years before we did. They actually built a city in the early 1960s, after Walt Disney joined, and it’s been up and running ever since. The place where they built it had to be hidden from the real world so that it would be very difficult to get to and nobody would stumble upon it accidentally. The only way to get there would be to be invited by a member of this organization. But also if you cross these guys, they kick you out, so that there would be exiles out there living in the real world, too, who were disenfranchised from this place.

Q:        Talk about the dynamic between Frank and Casey and Athena and how they find themselves together.

A:         Athena, who essentially recruited Fran for Tomorrowland back in 1964, is now recruiting this young teenager, Casey. Casey is also on the verge of giving up on her dreams because she’s been born into a world that doesn’t really look optimistically at the future anymore, otherwise known as the modern day. When Athena gives her one of these pins, Casey gets a glimpse of Tomorrowland in its prime and this completely and totally shifts her consciousness and she has something to aspire to now, something to hope for. She begs Athena to bring her to this place. Athena can’t take her there but she tells her that Frank, who’s now a grown man, knows how to get there. So Casey and Athena journey to Frank’s farm in upstate New York to try to talk him into bringing them both back into Tomorrowland to see what’s happened there. That’s when the three of them become fairly unlikely traveling companions.

Q:        When you were writing these characters, did you see George Clooney?

A:         Brad Bird and I, from very early on, always described Frank as George Clooney-esque, and whenever we would talk about actors for Frank, the thinking was who’s like Clooney? So, we decided to approach him with the project. We made some phone calls and we got a couple of hours of George’s time. Brad and I went over to his house with the box and said, “Did you ever wonder why we stopped dreaming about the future? That’s what our movie’s going to be about.” George was interested and asked us to send him a script when it was finished. We crossed our fingers and did our best job of writing it, infusing our tailor-made character with a sense of curmudgeonly humor and a heroic quality—all of which we think George embodied. Then we sent it off into the universe and happily for us, he liked it.

A:         April Webster and Alyssa Weisberg, our casting directors, showed us this video that was taken on an iPhone in the U.K. of this little girl reading some of Athena’s lines. The audio quality was terrible and, again, it was video taken on an iPhone, but Brad and I were just completely and totally captivated by her from the moment that we saw her. We flew her out to the States and had her read with a number of different actresses who we were trying out for Casey. But I never felt like Athena was going to be anyone other than Raffey.

Q:        How did Britt Robertson stand out for the part of Casey Newton?

A:         The part of Casey was the hardest role to cast. We were auditioning many different actors and there were too many different possible choices, especially because, although George Clooney is the star of the movie, Casey really does some heavy lifting.

We knew it would take somebody with a tremendous amount of confidence and bravery as a person, let alone an actor, to pull that off. Britt, every time she came in—and she probably auditioned for this part eight or nine different times—showed us new colors and eventually it just became undeniable that it should be her.

A:         Where do I begin? My father and I shared a great love for movies and television and I remember very specifically watching “Amazing Stories,” which was the Steven Spielberg anthology show that was on in the ‘80s. One of the episodes of “Amazing Stories” was this full half-hour cartoon called, “Family Dog,” and my dad recorded it on his VCR. I just watched it over and over again because I thought it was hysterical and very sophisticated and I’d never seen anything like it. The animation style was different than anything that I’d ever seen before and the person who made this thing was Brad Bird. Years later, when I became a huge fan of “The Simpsons,” I started seeing this name, Brad Bird, again and I wondered if that was the same guy who did “Family Dog.” Then when “Iron Giant” came out, I thought it was extraordinary. Over time, I became a huge fan of this guy who was doing animation that wasn’t kiddy fare. It was highly-sophisticated, subversive, funny, surprising, fully engaging and just totally unique and original. And then sure enough the Pixar movies happened—“The Incredibles” and “Ratatouille.” Brad exploded after those. I felt the way someone who follows a band feels when they make it big. So I knew this guy had the goods twenty years ago.

I finally had the opportunity to meet Brad through Michael Giacchino. Michael was scoring “Lost” and he’d also scored “The Incredibles.” When I first met Brad, I kind of accosted him and gushed all over him. He probably was like, “Who’s this freaking stalker? But, then Michael told Brad that I wrote “Lost,” and it turned out that Brad was a fan of “Lost.” So whenever we would run into each other, we would talk about each other’s projects. Finally the opportunity came along for us to actually collaborate on one and it’s been one of the most creatively satisfying experiences of my life.

TOMORROWLAND is at Irish cinemas from May 22nd