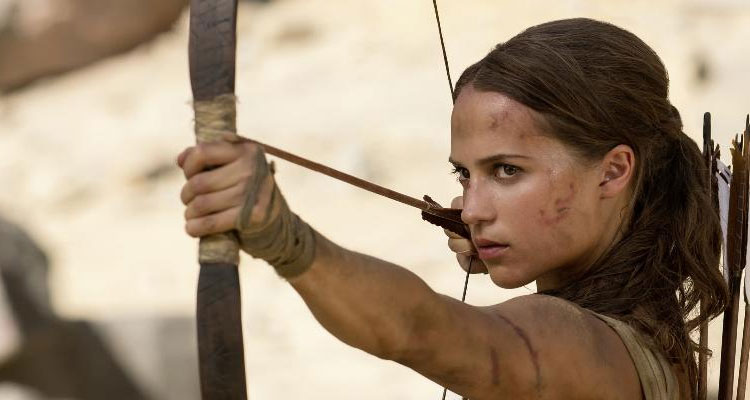 TOMB RAIDER (UK | USA/12A/112mins)
Directed by Roar Uthaug. Starring Alicia Vikander, Walton Goggins, Dominic West, Kristen Scott-Thomas, Derek Jacobi.
THE PLOT: Seven years after her father goes missing seeking a mythical tomb, Lara Croft (Alicia Vikander) finds a clue to his whereabouts, and goes searching for him. When she arrives on the island where her father was last seen, however, Lara discovers that she is not the only one seeking answers, and so begins a race against time to save her father, and the world.
THE VERDICT: It has been 15 years since movie fans last saw Lara Croft on the big screen. Played by Angelina Jolie, the early 00s version of Lara Croft was less than successful, but with the games still being played by millions, it is not surprising that Ms Croft has been brought back to the movies, this time played by Oscar winner Alicia Vikander. The trouble with the first franchise was a general lacklustre feel, and although the adventure has been ramped up for this new outing, there is a definite lack of fun to be had with the film.
As mentioned, Alicia Vikander takes on the role of Lara Croft, and although there is little doubt that she is a great actress, it is tough to say that Vikander is enjoying herself here. It is hard to shake the idea tthat Vikander took the role of Lara Croft to gain some distance between herself and the more serious roles she is known for, but this does not mean that she is right for the role. Vikander runs, fights and quips with the best of them, but there is a twinkle in her eye that is missing, as well as the feeling that she is enjoying herself. The rest of the cast features Dominic West as Lara’s father, Walton Goggins as villain Mathias Vogel, Daniel Wu, Kristen Scott-Thomas, Derek Jacobi and Nick Frost. Goggins and Scott-Thomas are sorely underused in their roles, and although Nick Frost brings the humour, it is too much to expect him to carry it through a film that is not in, for the most part.
The screenplay, written by Geneva Robertson-Dworet and Alastair Siddons makes sure that is borrows liberally from the feel of ‘Indiana Jones’, but too much time is spent establishing the worlds that Croft lives in, then finds herself in for the film to feel like it is a lot of fun. As well as this, conflicts are resolved too easily, character actions are not always believable, and for a character that has lasted for over 22 years in various media, Lara Croft feels bland and far less entertaining and relatable than she should.
Norwegian director Roar Uthaug does his best to make ‘Tomb Raider’ a fast paced and exciting film, but too much time is spent getting bogged down in details. When the actual tomb raiding finally does happen it is definitely the most entertaining and exciting part of the film, but the mystical and adventurous feel soon gives way to the same old conflicts, just in a place that has been lost for a very long time.
In all, ‘Tomb Raider’ is nowhere near as much fun as it should be. Alicia Vikander does her best, but feels miscast in the film, while Walton Goggins and Kristen Scott-Thomas are sorely underused. Without the campy tongue in cheek feel of ‘Indiana Jones’, the high stakes action of ‘Mad Max: Fury Road’ or the fleshed out, relatable characters of ‘Wonder Woman’, ‘Tomb Raider’ feels like a pale imitation of all three, without ever reaching greatness on its own.
RATING: 2.5/5
Review by Brogen Hayes