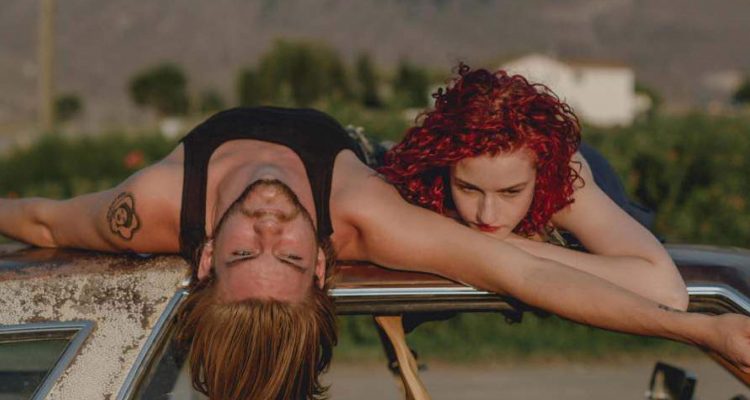 TOMATO RED (Canada | Ireland/UC/112mins)
Directed by Juanita Wilson. Starring Julia Garner, Jake Weary, Anna Friel, Nick Roux, Douglas M. Griffin
THE PLOT: Sammy (Jake Weary) is fresh out of jail and looking for new friends and a way to spend his weekends. When his newest attempt at making friends leads him to break into a big house, he falls asleep and is awoken by Jamalee (Julia Garner) and her brother Jason (Nick Roux), who do not live in the house, as Sammy first believes. Fascinated by Jamalee and her bright red hair, Sammy agrees to provide security for the siblings, and help them get away from the prejudice of Venus Holler, where they live.
THE VERDICT: Based on the novel of the same name by Daniel Woodrell, ‘Tomato Red’ is written for the screen and directed by Irish filmmaker Juanita Wilson. Wilson’s last film, ‘As if I am Not Here’, dealt with the Bosnian War of the 1990s, and this time she has turned her attention to middle America and its forgotten people.
Jake Weary leads the cast as Sammy, the drifter looking for a place to belong and people that will have him. The character’s problems are fairly easily solved when he meets Jamalee and her family, and other than some brief forays into burglary and anger, Weary does not have a lot to do here. Julia Garner plays Jamalee, and although the character starts off as mysterious and alluring, this is quickly lost, and it is difficult to see just what Sammy sees in her. Anna Friel is the real stand out of ‘Tomato Red’, making Bev – Jamalee and Jason’s mother – cutting and sharp, with a wicked turn of phrase and temper. The rest of the cast features Nick Roux and Douglas M. Griffin.
Juanita Wilson’s screenplay shifts the perspective of the story from Jamalee to Sammy, and in doing so, moves the audience to role of observer in the story, rather than feeling engaged and enthralled. As well as this, there are times when action takes place off screen, and so little explanation is given that the audience finds themselves scrambling to keep up. There are some wonderful turns of phrase in the dialogue, and Bev is a wonderful character, but the way the rest of the roles are written do not really allow the cast to get their teeth into their performances.
As director, Juanita Wilson allows the film to drift for the first hour, and while it is nice to watch these characters interact with one another to an extent, there comes a time when these rather thinly sketched characters fail to hold audience interest. As well as this, the event that kicks everyone into high gear happens too late in the film to rescue the loose and meandering feel that is created on screen, meaning that the pacing is a mess and too loose to be engaging.
In all, ‘Tomato Red’ is a meandering and messy film, but Anna Friel shines as the cutting and smart Bev. A tighter script and stronger narrative arc would have benefitted these characters, as well as stronger direction to make Jamalee, Sammy and Jason truly interesting and engrossing.
RATING: 2/5
Review by Brogen Hayes