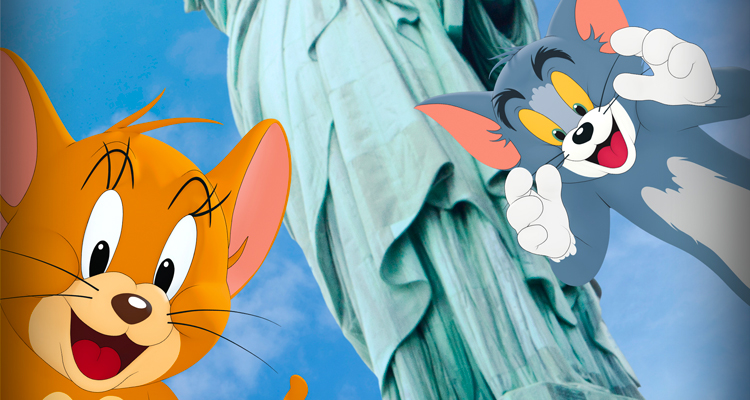 The Plot: Tom the cat is left irritated when Jerry the mouse upstages his musical act in Central Park and causes chaos. From this point onwards, they are sworn enemies. Homeless, both of them find their way to the swanky Royal Gate Hotel, where they find a mediator of sorts in Kayla (Chloe Grace Moretz). She’s no angel either, having just blagged her way into the job of handling the wedding of a celebrity couple while events manager Terence (Michael Pena) looks on nervously. While Kayla tries to negotiate with new hotel resident Jerry about not causing problems, she hires Tom to keep him under control. The hapless Tom though leaves a wake of destruction. It’s going to take a lot of work to get the wedding on track and get these best of ‘frenemies’ working together…

The Verdict: Created by William Hanna and Joseph Barbera in 1940 as pre-film animated shorts, arch rivals Tom and Jerry have had a lasting appeal that spans generations. The original bitesize shorts were insanely inventive and fantastically violent, inspiring the cartoon-within-the-cartoon of the world’s longest-running animated TV show. Well, within the boundaries of animation when directors can get away with things like that. The 21st Century iteration of this is new feature-length film Tom And Jerry, which is now available for home viewing. It combines animation with live action, a la Who Framed Roger Rabbit. Any living thing that isn’t human is animated here, from fish to dogs and elephants. However, don’t expect anything as wildly inventive or as imaginative as that landmark film.

The film begins rather crassly with a rapping pigeon, voiced by director Tim Story. Take from that what you will. After that, it becomes a film based mostly around chaotic events spun out by Tom and Jerry at a well-run and orderly hotel. A bland celebrity couple, who extravagantly want elephants at their wedding, have no intention of being upstaged by a stray cat and a too-cool-for-school mouse. Amidst all that narrative fluff is where we find one Chloe Grace Moretz. Her sunny disposition throughout just about masks the fact that she’s acting against co-stars who aren’t there. She’s more talented than this film deserves though and may regard this as a forgettable gig in later years. Her character Kayla is inspired by Sandra Bullock, Meg Ryan and Jennifer Aniston and she does get across that amiable America’s sweetheart vibe. But when all the other human characters are less well-drawn, one has to wonder whether the format mix gels together.

The glue between the animated and live action segments does not seem to have stuck well. The fact that there are animated characters in New York is explained away by a random character who says that that there a lot of weird things in the Big Apple. Indeed, but adults will need more than that explanation and blink-and-you’ll-miss-’em film reference gags to make the whole thing more bearable. Tom and Jerry are the stars of the show, but they’re often playing second fiddle to the human characters. The audience is literally being beaten with that fiddle throughout, when we’d much rather watch Jerry whack Tom repeatedly with it until he’s seeing tweeting birds. While there are flashes of genius in the animation, there’s not enough of it to bring it in line with the zany tone of the original shorts (Hanna and Barbera are no longer with us, sadly).

Tom and Jerry’s anarchic edge has been blunted somewhat by more modern tastes and an apparent need to bring human characters into their world, now fully visible rather than from the neck down. Even more regrettable is a modern addition to have them patch up their differences and work together for the common good. When did Warner Brothers go all cuddly Disney and deliver a message for children to learn about acceptance? Is that what audiences want from these characters? One suspects not. The 2021 take of Tom And Jerry ultimately comes across as stale, patronising cheese.