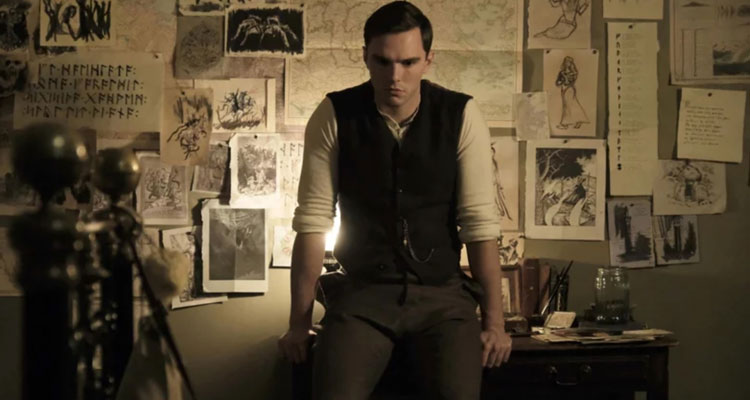 The Plot: Long before he wrote the definitive fantasy stories The Hobbit and The Lord Of The Rings, John Ronald Reuel Tolkien (Nicholas Hoult) was a sensitive young man with a feverishly imaginative mind. He had a gift for languages, especially the mythology of Olde English. He also courted childhood friend Edith (Lily Collins). While in school, the young Tolkien (Harry Gilby) forms a friendship with three other similarly-minded boys. Their lives take them to Oxford, where Tolkien yearns for a scholarship to develop his ideas further. They form a club and meet in secret. When World War I intervenes, they find themselves on the battlefield. Wandering the hellish no-man’s-land of trench warfare, Tolkien sees visions of death and destruction. Not all those who wander are lost though…

The Verdict: Just days before release of new biopic Tolkien, the notoriously prickly Tolkien Estate stated that ‘they did not approve, authorise or participate in the making of this film’. They’ve resisted biopics of J.R.R. Tolkien before and weren’t exactly warm to Peter Jackson’s acclaimed adaptations either. Maybe there’s no such thing as bad press though, especially if it starts a conversation about what made the author tick. For this is a well-made, respectful and sensitively-handled biopic which is intriguing throughout.

There’s a Dead Poets Society-style literary vibe to this film. It’s based around the world of academia and a secret society that meets to discuss literature and the meaning of language. The framing device is the battlefield of the Somme in 1918, where a shell-shocked Tolkien sees visions of a fire-breathing dragon and a creature of shadow and flame not unlike the Balrog. The story flits back occasionally to his youth and then his college years, showing the gradual formation of his landmark fantasy stories through his eye-opening experiences and love of language and mythology. The Lord Of The Rings is, after all, an imagined and heroic history of England.

The main theme of the film is fellowship and this is the film’s strongest point. Cyprus-born Finnish director Dome Karukoski spends a large part of the film emphasising Tolkien’s friendship with three other outcasts as their lives take them in different directions – sometimes tragic but always hopeful. Karukoski does this in a subtle manner, gently nudging the audience to spot how all these various ideas and experiences coalesced into two masterworks of fantasy literature. It’s a portrait of the artist as a young man, without recourse to old age make-up to bridge the gap to Tolkien’s eventual publication of the two books in 1937 and 1954 – 1955.

There’s enough of the good stuff here to bridge that gap, even if it doesn’t quite dig deep enough into its subject to portray him as the author of the UK’s best-loved book. Hoult does a fine job as the introspective young Tolkien. You can sense that he respects and reveres his character. Tolkien’s relationship with Edith comes across as under-developed though, given her apparent encouragement of his talents. While Karukoski goes down the conventional biopic route, he does so in a way that is visually striking and has its own distinctive touch. It’s not the one biopic to rule them all, but it’s a good enough attempt to warrant curiosity.