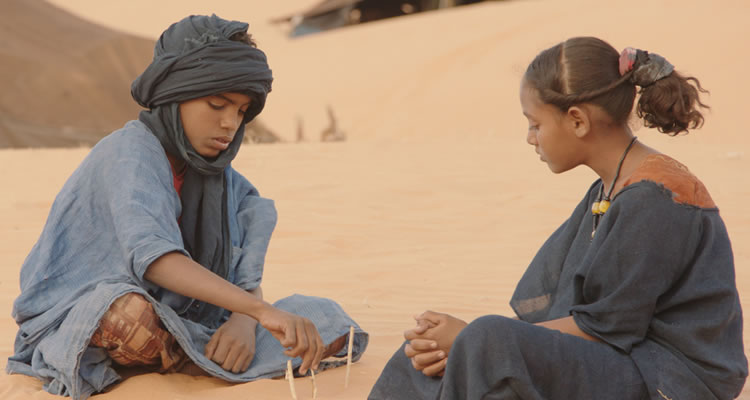 TIMBUKTU (France/Mauritania/12A/100mins)
Directed by Abderrahmane Sissako. Starring Ibrahim Ahmed, Abel Jafri, Toulou Kiki, Layla Walet Mohamed, Mehdi A.G. Mohamed, Hichem Yacoubi, Kettly Noel, Fatoumata Diawara.
THE PLOT: The fundamentalists may have taken control of Timbuktu, causing many of their neighbours to flee, but Kidane (Ahmed) and Satima (Kiki) have stayed on, the married couple looking after their 12-year old daughter Toya (Mohamed) and orphan boy Issan (A.G. Mohamed), the latter looking after the family’s eight cows. As the Islamists inflict stricter and stricter rules on the town – such as a ban on “any old thing in a public place” – the natives become increasingly exasperated, and restless. For Kidane and his family, a taste of freedom can be found with a trip into the surrounding desert – where the girls don’t have to cover their heads, and Kidane can play his guitar. Such a volatile existence though means life can take a dark turn on the smallest of pivots…
THE VERDICT: A big hit at Cannes in 2014, this slow, methodical but wry exploration of life during Islamic fundamentalist times manages to convey the horror for those close to the fire and brimstone. That this all takes place in such a beautiful setting makes the madness and the hardship all the more upsetting. There is humour here too, which certainly helps the medicine go down, writer/director Sissako’s delicate balance of tenderness and totem totalitarianism making for a potent kick here.
RATING: 4/5
Review by Paul Byrne