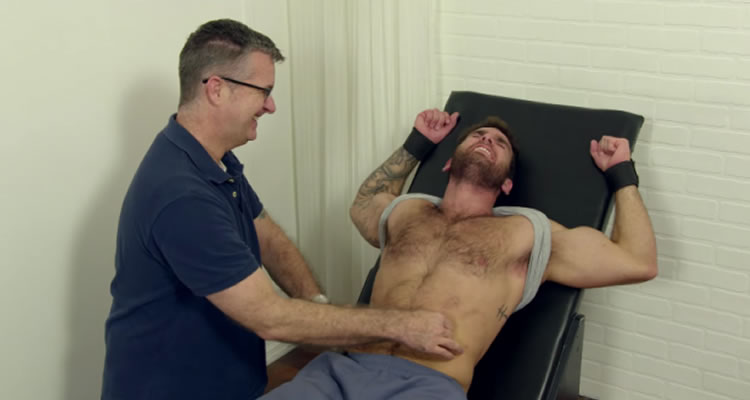 TICKLED (New Zealand/15A/92mins)
Directed by David Farrier and Dylan Reeve.
THE PLOT: When journalist David Farrier stumbles across the world of Competitive Endurance Tickling online, he is understandably intrigued and tries to set up an interview with the company behind the video; Jane O’Brien Media. What Farrier didn’t expect however, was a personally abusive email in response to his request, followed by threats of legal action. Intrigued, Farrier decides to ignore the warnings and travel to the US from his home in new Zealand to try and find out more about the sport of ticking, and just why Jane O’Brien Media is so determined to shut his query down.
THE VERDICT: The starting point for ‘Tickled’ is a curious and strange one, but as the film goes on, and directors David Farrier and Dylan Reeve uncover much more than they thought was going on, the information gets jumbled and the giggle worthy reality – that this is a documentary about competitive tickling – somehow gets lost.
Throughout ‘Tickled’ it seems as though something more is going on than we are being told. Many people involved in the “Tickling Cells” that Farrier uncovers do not want to be interviewed on camera for fear of reprisals – which included internet blackouts, spam attacks on the White House in their name and generally threatening to ruin their careers and release their personal information online – and although this turn in the film is an incredibly serious one, there is also the reality that gets ignored; these videos are being made for tickle fetishists, and as torture porn goes, this is fairly mild, and rather odd.
Throughout the film, as the story runs deeper and deeper, Farrier talks to people who work for Jane O’Brien Media, but have never met her, and this somehow leads to Farrier finding out about a woman who operated online in the early 2000s, with a similar modus operandi, and this just brings the story deeper. The trouble is that while the pieces of the film fit together, they do so rather loosely, without ever giving a satisfactory ending to this loose and rambling documentary, which somehow turns from something light and fun to something dark and sinister in the blink of an eye.
In all, ‘Tickled’ is an intriguing premise for a documentary, but since most of the film is spent doorstepping angry people, talking to subjects superficially about tickle fetishes, and a central story that simply peters out, ‘Tickled’ is a film with a great idea but an unsatisfying result. It is interesting to spend time with Farrier as he goes under the surface of tickling, but a stronger edit and a clearer ending would have made for a much more satisfying and less drawn out film.
RATING: 3/5
Review by Brogen Hayes