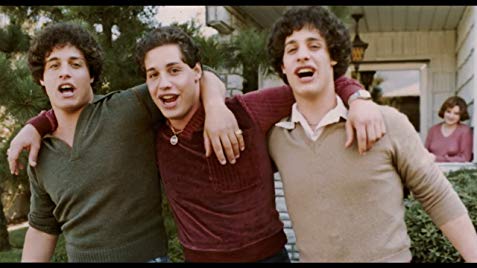 The Plot: New York, 1980. 19-year-old Bobby Shafran joins a community college, whereupon many people welcome him back, hug him and even kiss him. Confused, he soon discovers that he has not a doppleganger but an identical twin at the same university – David Kellman. They were separated at birth and never knew of each other’s existence. The story breaks out into the media whereupon a third identical brother, Eddy Galland, comes forward. Their remarkably similar behaviour and life experiences makes them instant celebrities. After the initial excitement of discovering each other, they come to query why they were separated in the first place by an adoption agency. That’s just the beginning of a story that went from amazing to incredible to downright troubling…

The Verdict: The well-worn phrase ‘truth is stranger than fiction’ could very well have been invented for Three Identical Strangers. It’s a documentary about a real-life story that even Hollywood couldn’t dream up in its wildest moments of excess. It relates the story of triplet brothers separated at birth, who later discovered that they were all living within 100 miles but with no awareness at all of each other. The first part of the film deals with the remarkable discovery, the second part… Well, that would be spoiling things. This is a film that works best with only a basic knowledge of what it’s about. It’s enough to state the film develops into a thought-provoking discussion of its themes. Then it really blows your socks off with its labyrinthine twists and turns.

The basic plot of this documentary would be enough to make an intriguing documentary or an interesting dramatisation with a feel-good factor. Director Tim Wardle and his skilful Irish editor Michael Harte instead dig deeper on an investigative level to get into some meaty subject matter. That’s what elevates this film from being fascinating to truly masterful, putting Wardle right up there instantly with the best contemporary documentarians like Kevin Macdonald, Errol Morris and Alex Gibney. The film is so carefully structured that its secrets are revealed layer by layer, drawing the viewer deeper into its complexity. The viewer discovers it along with the brothers themselves, as they relate their jaw-dropping story one step at a time.

Wardle draws in a generous amount of other interviewees, from family members to wives, friends and investigative journalists. He creates a tapestry of varying opinions about what happened, why it happened and where we go from here in questioning the actions of other parties. It’s a mostly balanced analysis, showing a maturity and level of understanding that the material so clearly demands (the slight imbalance can be attributed to a certain reluctance from some parties). The interviewees, especially the brothers, are open, frank and  admitting of their flaws. There’s a sense of time lost, a childhood together that they had a right to but missed out on. It’s an inhumane story of child separation… but told with an ever-present humane attention to detail.

That level of delicate consideration from Wardle and Harte in their narrative makes this an outstanding documentary that’s every bit as thrilling and provocative as a dramatic feature. From the opening frame when Bobby sits down and says that it’s true, every word of it to the  closing question mark thought, not a foot is set wrong. That’s rare for a first timer. With a supreme command of his material, Wardle mines it for maximum impact and delivers a gut punch of a film that rams home its core message about the importance of brotherhood, family and parenting. If you see one documentary film this year, then this is it. Truly remarkable in every respect.