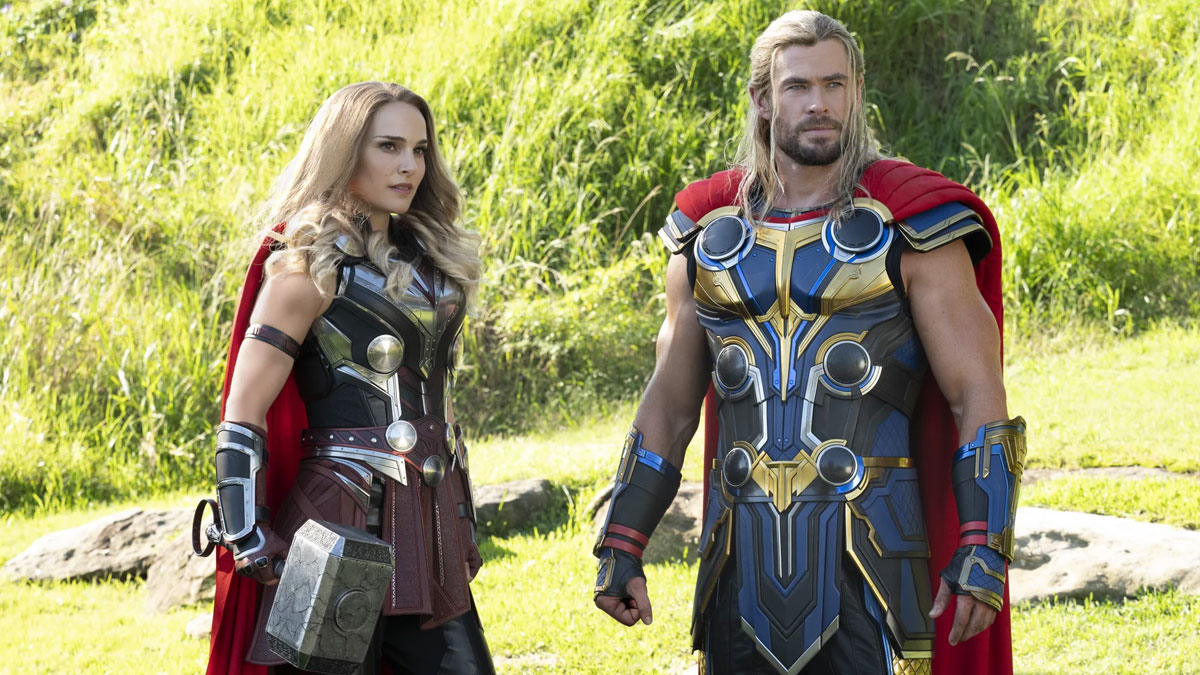 The Plot: Sad God Thor (Chris Hemsworth) has somewhat lost his mojo. Being roped into battles by the Guardians Of The Galaxy has become routine and lacks the sparkle that he’s used to. The surprise return of his ex-girlfriend Jane (Natalie Portman), wearing armour and wielding his old hammer, is sure to liven things up. The dynamic duo have a complicated history together, but they still care for each other. They’ll need the strength of their former love to fend off the threat of Gorr The God Butcher (Christian Bale). Wielding a deadly sword that can kill immortals, Gorr has a grievance that needs to be balanced out in the search for his own dark and twisted form of intergalactic justice…

The Verdict: If making a Thor sequel can be compared to re-assembling the broken pieces of Thor’s hammer Mjolnir to form a satisfying and effective weapon, then director Taika Waititi has proven to be the magic glue that holds it all together and makes the pieces work in unison. After Kenneth Branagh’s first grand Shakespearean outing for the Norse God, there was a somewhat muddled misstep in the first sequel Thor: The Dark World. Thor really needed to lighten up a good bit and not be so broody. He also needed to be taken down a peg or two, such was his supreme confidence in himself, his godly powers and his buff appearance. The character was ripe for sending up. Enter quirky Waititi of Hunt For The Wilderpeople fame, who jazzed up the formula with Thor: Ragnarok and the rest is ancient Norse history. Not quite. Marvel have invited him back for a second helping with Thor: Love And Thunder to see if the lightning, love and thunder can all strike twice and still work effectively.

The answer is mostly yes. Back in the director’s seat and wielding his distinctive Kiwi sense of humour like Mjolnir, Waititi’s film is a blast of comfortable summer sunshine bottled into an attractive, colourful and action-packed spectacle with an emphasis on the word FUN. Taking centre court in a relatively quiet month for mainstream releases (Bullet Train and Nope made some space and shifted into August), Marvel’s mid-summer offering is very much what one would expect of them and should comfortably clean up at the box office. Love And Thunder benefits early on from Waititi and Jennifer Kaytin Robinson’s script, establishing that Gorr is not just another cookie-cutter antagonist but an ordinary man who has lost everything and then gained a dark power to become more than he could ever have wished for. The contrast between the troubled, murderous Gorr and the carefree, has-it-all Thor is well-drawn to the point where one realises that there’s a lot more at stake in the cosmos than initially appears. So too is the sparky contrasting relationship between Jane and Thor, both drawing from their inner strength and strength of feeling to rekindle that old flame.

It’s that depth of emotion aligned with the power of love and the fate of the universe that makes Love And Thunder that bit more than just a popcorn blockbuster. Waititi’s direction is at his strongest when he’s working with the trio of Thor, Jane and Gorr and the actors suitably rise to the challenge. Hemsworth moves beyond just self-parody and shows a nice line in Dad humour when acting opposite his young daughter India Rose. Portman likewise brings some resonance to her role, returning in triumphant and emotionally resonant form while showing that she can fight just as effectively as the boys. Ordered to take the role of Gorr by his children, Bale lends a dark and commanding presence to his god slayer. So scary in fact that Waititi had to trim his performance back in the edit in order not to conjure up nightmares in the minds of the younger Marvel fans. Whether he likes it or not, Bale has now officially ‘entered’ the Marvel Cinematic Universe, having already played around in the DC sandbox.

Amidst all the good stuff though, there is a fair chunk of time-digesting silliness to wade through. Some of it hits the bullseye like an ongoing rivalry between the various weapons who show some personality and a running gag involving giant goats that know how to make an entrance. Other sections feel like inserted comedy sketches rather than dramatic set pieces, most notably dropping in to a sort-of God hangout lorded over by a heavily-accented Russell Crowe as Zeus. Crowe has some cheeky fun and a twinkle in his eye with the godly role, but the scene is overstretched and doesn’t add much to the overall story or character progression. Keeping Thor on point is what’s important here and while poking fun at him is a prerogative, Waititi also knows when to tug at the heartstrings to make him that bit more human. As the credits roll with a Bond-style Thor Will Return notice, Thor has certainly moved on from his initial Shakespearean outing to a space rock opera. Marvel would be wise to hold onto the busy Waititi. He has proven once again to be Thor’s secret weapon and has a strong visual eye which switches from his candy-coloured world to a stark black and white one at one crucial point. Love And Thunder is a lively blast that will surely please Marvel fans and general audiences alike.

In short: A lively blast